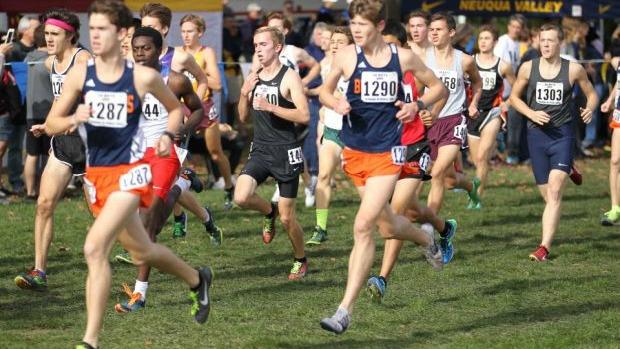 It was a glorious day for cross country teams from Mahomet-Seymour and Belvidere North...

For the boys, Mahomet-Seymour won their first title after finishing runner up two years in a row. The Titans dominated every race they stacked the team in except at the Peoria Notre Dame Invite in a loss to Neuqua Valley. But on this occasion coach Neil Garrison's troops went out and stomped on the competition. How does six all-state athletes sound? The seventh man Gabe Pommier (Sr.) was the lone wolf missing the individual podium; he fell short by two slots and three seconds. Pommier had a bit of an "off day" if you consider a 14:47 guy only running 15:02 an off day. Regardless, the US #14 Bulldogs scored 58 points in a payback win. Even if the Bulldogs agreed to be handicap with their 7th man the score would have been just 97 points and a 1-7  mano a mano 31 splits!! Yikes! DOMINATION!

Grayslake Central did not appear to be bothered by the blowout since they won the title last year in the same fashion. They suffered some key losses to make any real threat toward Mahomet-Seymour. Secondly, a consolation prize like watching triplet seniors Jack and Matt Aho going 1-2 felt a bit nice. And finishing second ahead of Normal University 134-188 was nice. Normal U High finally got a trophy after finishing 10th the last few years. The youth movement of a few years ago has paid off nicely and senior Jack Franklin's third place finish is a key reason why.

I am not sure we have fully absorbed what winning the State title means to each of our runners and the program.  I think it really was a rewarding experience to have it all work out the way it did.  So many of our alumni were supporting and encouraging us over the years to continue to improve.  We really felt a sense of obligation to try to win a State trophy and now a State Championship trophy for them.  The past coaches, the alumni, and the alumni parents really set us up.  Each year the past team's would give their hearts to try to beat the previous year's team's best efforts.  They did this both out of a sense of respect to their past teammates, but also out of a sense of obligation to the future teams to set a higher standard for them.  Year after year our alumni teams worked hard to improve.  So this win in so many ways was for them helping raise the standards for our current team.

Our boys do plan to run at the NXN Regional meet.  We hope to do our best to represent Illinois well.

We know how incredibly hard it will be to be able to compete with the Illinois AAA top teams and the State champion teams from the other States.  We have so much respect for those programs that we just feel lucky to have even been compared to them all season. 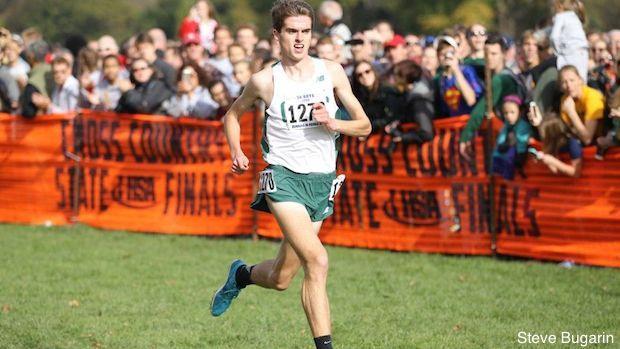 J. Aho once again let the pace come to him. He went out front running comfortable ahead of Franklin and his brother Matt. The opening mile was 4:41 and chasers not too far back. J. Aho continue to maintain his composure and control of the race as he excited the back loop. At 2m, he was striding smooth and three seconds ahead of Franklin at 9:30. J. Aho did not pull away until the last half mile. M. Aho began to muster up a challenge and close the gap on his brother. He surged and caught a tiring Franklin and moved into second. The brothers ran personal bests 14:12 and 14:27. Siblings have went 1-2 in the past but you will be hard pressed to find another sibling pair perform as well. It is definitely rare to see a triple combination. Triplet sister Elizabeth Aho placed 60th and led her team to a 5th place finish.