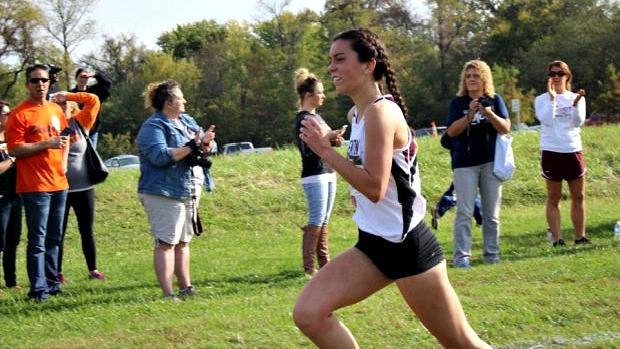 It was a busy but exciting day out on the SIU-Edwardsville cross country course Saturday, which hosted both two sectionals 1A/3A.  Getting the day started were the Girls' and Boys' 1A races.

The girls' race experienced little change in the front runners throughout the span of the race.  Benton freshman Mia McLain took the early lead from the start of the gun, working to distance herself from the other runners. Sophomore Elyse Faust of Breese (Mater Dei) followed behind McLain, with Freeburg freshman Breanna Chandler keeping them both in sight.

Two miles into the race, Chandler had surpassed Faust and was running second to McLain who held her lead to the very end to win with a time of 19:48.17.  Chandler finished second with a time of 20:03.91, followed by Faust who was being pushed by Alton Marquette freshman Riley Vickrey.  The two finished within the same second with Faust at 20:09.38 and Vickrey at 20:09.75.  It was an impressive field with the top ten finishers being mostly freshman.

The Freeburg girls also took home the sectional title with 52 points.  Coming in second with 67 points was Breese (Mater Dei).  Placing third through fifth and also advancing to state was Nashville, DuQuoin, and Chester.