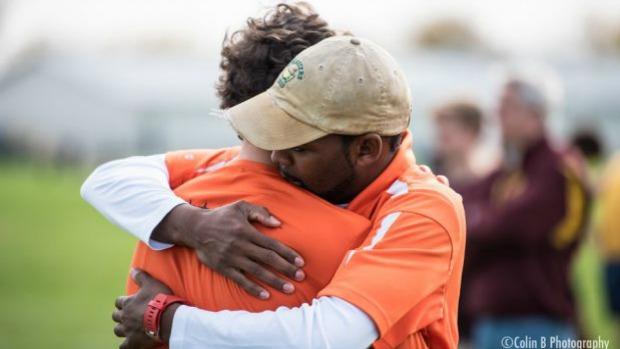 It was a gorgeous day to be at a cross country meet even though the overcast skies prevailed much of the morning and into the afternoon. The above average temperatures (the mercury rose to 65F by noon) was more than welcomed to a packed venue at Niles West High School for the co-ed 3A sectional.

#11 Chicago Whitney Young came into the state series on a shaky note despite winning the CPL title with ease and being ranked high in the Flo 50 poll all season. Some of the doubts have been because their steady ace junior Clayton Mendez had not performed up to his usual standards. However, coach Poole-Harris uttered with confidence: "I have a good feeling about today. We had a good week of practice." Among the other schools vying for a trip to Peoria were York, Wheaton-Warrenville South, New Trier, St. Ignatius, Maine South, Loyola Academy, and Glenbard West.

It was perhaps the course conditions more than the warm weather that produced a quagmire among many runners for the first quarter of the race. Whitney Young quickly had three runners among the top 10 in that early going which seemed to set the tempo. Senior Keduse Worku continued his late season solid racing by once again getting situated as a front runner. He along with Mendez and sophomore Sam Rivera formed an iron clad that held true throughout the race. Maine South looked strong as well with senior Reese Jordan front running as expected. The Red Hawks were fully loaded this time after resting a few regulars during the regional round. Sophomore Tommy Brady has been a great #2 man for the Hawks and he continued that sentiment with a 10th place finish. Ultimately, it was the 1:14 scoring split that would prevent Maine South from defeating Whitney Young.

The Dolphins scored 98 points and won quite easily. The final three spots were decided by one point as York, Wheaton South, and New Trier scored 118, 119, 119 respectively. York tied WY with the fastest man scoring average with a solid 15:44. Things could play out differently next weekend if Kern is the state champion.

The Dolphins made a bit of history on Saturday by becoming the first Chicago Public League boys team to win the "major league title" known as the 3A sectional. It says a lot about Chicago Public League cross country which has had teams and individuals qualify out of sectionals on the regular. At one time the CPL was given a handout with their own sectional which became a set up for failure when they got to state. As for Young, it is a strong belief now and with some improvement between Worku and the fifth position, the Dolphins have a legitimate chance at finishing inside the top five.

Individually, many patrons were looking for a fast pace race with York junior Charlie Kern doing most of the yeoman work. Nope. As it has been a policy with Kern, he played follow the leader and allowed the race to unfold. The first mile crossed in 5:00-01 for the leaders. Jordan, Kern, Von Steuben senior Jaimie Marcos, New Trier senior Warren Blood, and Loyola senior Paolo Tiongson headed the immediate pack. Tiongson, who won the Niles West Pat Savage Invite earlier in the month, was playing with house money. With the course having a few sloppy areas from heavy rain earlier in the week, he certainly knew how to negotiate his way on the path and could eventually steal the race.

By the halfway point there was a clear separation and if anyone wanted to qualify as an individual, it would be imperative for them to stay within striking distance of the lead group. Jordan held a slight lead at 2m in approximately 10:13. Still, it was anyone's race if they wanted to take it. The last half mile was where Jordan began to pull away from the field. As he entered the stadium and with 300 meters to go, he held a lead of about 3-4 meters. Kern was in striking distance but could not mount a surge strong enough to overtake Jordan who won in 15:05. The field was so strong that 16th place was the individual cutoff to state. Lane Tech sophomore Julian Higueros earned the final spot to Peoria.