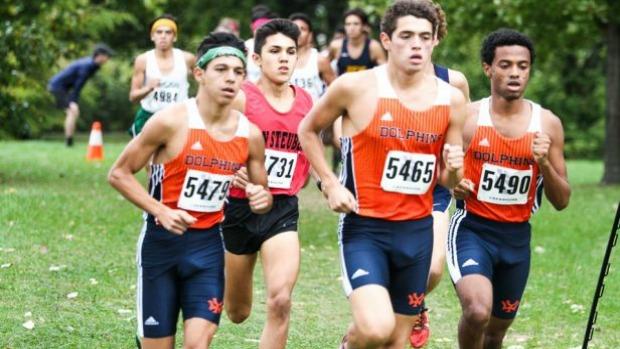 Although the day started out gloomy with overcast skies and a threat of rain, it was actually a great opportunity to watch a cross country championship. The climate at Washington Park on the south side of Chicago was a good one- especially now that the threat of a teachers union strike in the rear view mirror.

Defending boys champion Whitney Young coach Billy Poole-Harris was especially gleeful that his charges had an opportunity to defend their title. The 3A #7 Dolphins did not waste a moment in getting after consecutive title #2. Whitney Young packed three of its top runners among the top five in the early going. Defending champion junior Clayton Mendez, senior Keduse Worku, and sophomore Sam Rivera were the key figures. They lurked with Jones senior Jeremy Adams and Von Steuben senior Jaimie Marcos. The group hit the first mile in approximately 5:05. The pack would break apart midway into the second mile led by Worku's strong surge. Keduse would hit the two mile marker just over 10:00 and did not look back. The former pre-high school star made good on the tremendous talent he possesses and won easily in 15:24. Marcos scampered home next in 15:31. A surprising Jesus Palmerin of Kennedy crossed the finish line in third. The senior beat Rivera and Adams who were ahead of the dogged Mendez and his sixth place effort.