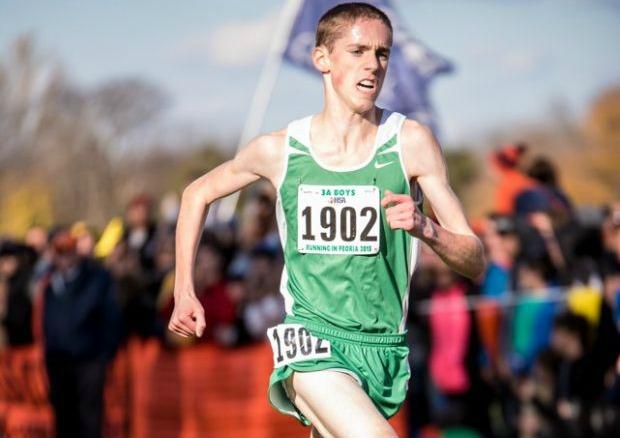 Ray's Take: Unless you have been living under a rock, surely you have heard the news of the biggest storyline in Illinois this year: in mid-August, legendary York coach Joe Newton announced he would be retiring after a supremely successful cross country coaching career which includes 28 titles and countless state trophies. Long time assistant Charlie Kern Sr. was introduced as the co-head coach/interim boss for the Dukes. Kern inherits a characteristically deep squad bent on returning to the medal stand. Charlie Kern Jr. is the top returner in cross country and surely will be competing for an individual championship, likely with eyes of the nation watching him, one of the top juniors in the country. Kern's style of racing, in direct conflict with WSC rival Irwin Loud's has helped identify him as the favorite in the eyes of many coaches around the state.

The Dukes are capable far beyond Kern as well. Sean MacGregor, Jackson Bode, and Tim Stevenson are all juniors just seconds within each other at around the 15:30 mark. Liam Hill returns to the team after injury and could be a very potent #2 for the Dukes, who have made a top finish in the WSC a goal. Watch for some of the underclassman newcomers as well: Eddie Ryan, Daniel Klysch, and a runner with a familiar last name... Ethan Kern.

Coach Charlie Kern Sr.: "Charlie struggled with health issues in the winter/early spring and had to focus on shorter events.  Will he be strong enough to race three miles with such high quality athletes? We expect our conference to once again prove it is the most competitive conference in Illinois and perhaps the best cross country conference in the country.  It is entirely possible that a team can finish 4th in the conference and then win the state championship. The goals at York are consistent training and put ourselves in a position to earn a top three finish."

Ray's Take: Whitney Young won the Chicago Public League with rare conviction in 2015 and set their sights very high, finishing 8th eventually and running 5 athletes under 15:30 (as well as 2 under 14:45). Yet despite graduating a couple of their scorers, the Dolphins remain young and poised to compete not just this year but for years following this one. The story starts, as it has for a while, with Clayton Mendez, who has finished 58th and 12th in his first two years of high school cross country. Although he returns as part of an extremely tough class of 2018, he will be competing for a top 5 finish at Detweiller. The rest of the varsity squad have been proven as well, including Evan Radomski, Keduse Worku, and last year's freshman phenom Sam Rivera, who missed the state meet due to personal issues. Anthony Tuman, along with those mentioned, has run at the state meet, and all will be backed up by Charlie Nevins and Marc Harvey. The expectations have skyrocketed for the Dolphins this past year and the team has kept its eyes on the prize, says coach Billy Poole-Harris.

Poole-Harris: "With how we finished last year, and the returners we have coming back; we have big goals this year. We are us focused on the process and the progress. We just need to do better than last year. They will keep us within the top 10, with the new team that we have. That all we are worried about.  I expect the teams in the City of Chicago to have a consistent year. Continuity raising the bar, despite the political riff raff that plagues our city. Our individual runners will shine, and we will have runners that shock the Chicagoland area and the state as usual."

Ray's Take: Despite the difficult sectional placement, Maine South has become a perennial state qualifier, and finished 13th at Peoria despite being plagued by injury issues throughout the year. The injury bug hit Reese Jordan, the Hawks' best runner in 2015, and severely hampered their ability to fulfill a goal of top 10 at state. He is back and had the best summer so far, and is prepared to chase after an all-state position in November. Brian Shanahan, Alex Ortwig and Brandon Christopher have been the pack during summer training and match up runner-for-runner very well with the 13th place team from last year. The rest of the varsity team can be filled in by a number of runners, but look in particular for a handful of talented younger runners who have also had excellent summers, particularly Ian Spears, Tommy Brady, and Ryan Prendergast (who also suffered injuries in 2015).

Coach Nordahl's forecast for 2016: "Our summer training has been fairly consistent over the last 5-6 years with solid results as we have moved to the beginning of the season. This year has been no exception and we will be prepared. Last season I predicted top 10 in state and we placed 13 th without or top runner, Reese Jordan. The most difficult part of the season is the IHSA sectional. This year's sectional will be back at Niles West. [Many teams] all will be competing to make it to the state meet and the race will be predictably brutal again. If we are fortunate enough to remain healthy we will again, make it to state and we will be top ten. Our 1-4 are better than last year and we have some good competition in 5-7 that will make us strong."

Ray's Take: New coach Chris Marks has one of the deepest sophomore teams in the state to work with this year at Buffalo Grove, a team that will have a little bit of growing to do to defend their MSL title from Hersey and Prospect. Mitchell Guittar entered high school as a promising young prospect, having Kevin Salvano and Tom Cleary to learn from and follow-now, he is the leader for the Bison and will look to bring home an important low stick for Buffalo Grove. Josh Hellyes and Arturo Bautista join Guittar with experience from the state meet, but also have the task of bringing along the array of younger runners for BG in 2016. Recently, Buffalo Grove has proven to run very well at the end of the year, and their reputation for showing up at big meets contributes to their preseason ranking.

Ray's Take: Not much needs to be said about Sandburg's 2015 season. State championship, 4th at NXN, historic season by the Torpy's in track. The sun always sets, however, and one of the best senior classes in Illinois history left Sandburg in 2016, with a couple varsity athletes still around but mostly the prestige of a dominant program. Dylan Jacobs and Martin Skucas were two of the 10 stars but the only ones still at the school. Both have run well under 15 minutes and both could be all-state, possibly giving Sandburg one of the best 1-2 duos in the state. The gap behind those two is very real, however, and a lot of improvement is in order for Coach O'Malley's Eagles. The #3 runner will probably be Alex Symanski, and then any number of athletes will be competing for the varsity team. Still, although many of the familiar names are gone, the culture of a disciplined, successful program remains and of all the story lines in Illinois this year, the wake year of Sandburg's incredible run is one of the headliners. Coach O'Malley's reflection on this fact is profound but indicative of the attitude that this new look Eagles team has for 2016.

O'Malley's Take: "Well, we have a unique combination going on: we are the defending state champions and we have only TWO top 100 returners(soph-junior-senior) in your MileSplit top returners for each class. So that's two out of 300 runners. Our guys' goals are to continue the level of excellence achieved in the last few years and to create a new legacy. They are really motivated to take those roles. It is going to be really tough and the guys mentality is what will be most key. How much will they enjoy the pressure? How much will they place themselves behind others with better credentials? It was challenging this summer but I am seeing some great things from many of our guys and we'll have to improve every week for us to have a chance against some of these top programs. The process is going to be for real."