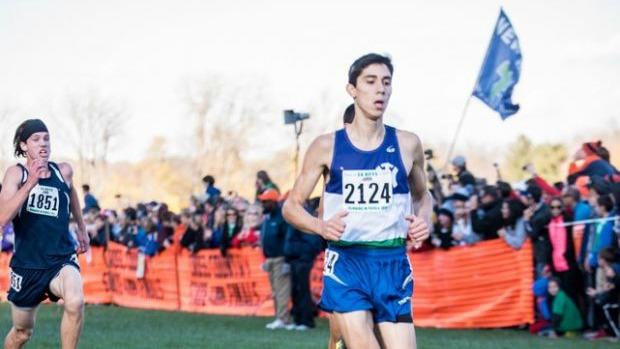 Ray's Take: For the past two years, the Friars have had one of the deepest Frosh/Soph teams in Illinois, and therefore one of the brightest futures as a squad. Now, their strong class of 2017 has matured into seniors and lead the Friars back into 3A where they have competed in the past. A trophy contender in 2015, Fenwick looks to the 1-2 punch of Alex Marks and Jack Darrow to begin the pack for the Chicago Catholic League contender. Not far behind is Emmet McEnery, along with a pack that includes Patrick Barnett, Joseph Wermes, Colin Marks, and Brendan Copp. Fenwick's "promotion" makes the Niles West sectional, which was already crowded, even more competitive and some good teams will have to stay home in November as a result. For Fenwick to qualify, they will have to make sure that they get at least two more runners at or under 15:50 along with their good 1-2-3 of Marks, Darrow and McEnery.

Ray's Take: Minooka ran a strong postseason last year, one that included a conference runner-up, regional and sectional championships, and a 16th place at state. Minooka has minimal turnover from last year and returns, perhaps most significantly, Soren Knudsen, who was all-state from last year and whose 1600m performance in Charleston in May opened eyes. Knudsen is easily the best runner in the southern Illinois sectional and is a valuable front runner for the Indians. Returning from their state team includes Justin Tutt, Jack Sullivan, Cody Hoshell and sophomore Jordan Freese. Minooka will run against southern Illinois competition most of the year so it may be difficult to gauge its strength early in the season, but look for meets at First to the Finish and the Twilight Invitational to get a sense of Minooka's ability to compete with the northern Illinois schools. Do not be surprised if Minooka makes a serious run deep into the top 10 at state.

Coach Gummerson: "We have a solid group of returners that have been working hard this summer. We want to run our best when it matters the most. We need to improve upon last year's finish at the state meet."

Ray's Take: A CSL North championship and a regional championship for the Giants in 2015 was followed by a distance ninth place finish at the difficult Schaumburg (H.S.) sectional. No matter for the 2016 Giants- they come into the season as one of the teams to beat in the Central Suburban League. Highland Park returns everyone behind their #2 runner and the team is deep- 9 runners have run 16:30 or faster for 3 miles in the last year. Any number of runners can lead the pack, including Jose Reyes (a sophomore), Jonathan Rosenfeld, Charlie Skurie, or Alec Glazier. There is a possibility that the 5 runner split will be minuscule for the Giants in 2016, but splits alone get you nowhere- if Reyes or somebody else can lead this pack close to 15:00 then Highland Park will open eyes this season in Northern Illinois. "Our team has come up with very lofty goals this season," said coach Steve Buti. "They are putting in the work to repeat as CSL North and IHSA Regional Champions and return to the State Meet as a team for the first time since 2012." Of note on Highland Park's schedule is the EIU Showdown, comprised solely of teams who are coached by alum of Eastern Illinois. Buti himself competed at Eastern Illinois after graduating from Rolling Meadows.

Ray's Take: New Trier finished in the top 10 for the third straight year in 2015 but lose most of their varsity team; the absences of Jack Litowitz and Josh Derrick are especially loud. But common knowledge in Illinois is that New Trier never rebuild, they only reload, and the indomitable depth of the Trevians will give them new names for a state qualifying team. New Trier led the country in sub-5:00 milers last track season for a reason. Warren Blood has been in his own class this summer for the Trevians, says coach Wisner. "His summer training has been outstanding," says Wisner. "In an attempt to keep him healthy, we have focused on quality over quantity and all indicators suggest that he is primed for a very special cross-country season. He is extremely motivated to be one of the elite distance runners in Illinois this season, but his contributions to our team go well beyond his race performances. Warren is a great teammate."

Blood already has a lot of help from Patrick Norrick and Cooper Woolford primarily, but also will be joined on varsity this year by Matt Burke, and a large handul of candidates that include Matthew Roge, Ben Citow and Sean Gorney. "With only two athletes returning with state meet experience, it's too early to determine where this team will ultimately finish at the state meet in November," says Wisner. "There are many talented runners in our program, but it will take time for them to adjust to varsity competition, pacing, and to master the art of pack running. Having this many runners with a chance to compete in Peoria will only make our team stronger and more competitive as they push each other in workouts and in races."

Ray's Take: New CCL addition Marmion Academy prevented Loyola from defending their CCL title, but Loyola is poised to take it back in 2016. Paolo Tiongson is the #1 returner in the Chicago Catholic League and has run under 15:00 already at Detweiller. If not for injury, Tiongson would likely have been a strong all-state candidate, but this year he certainly will be focused on font running for the Ramblers. A very formidable pack is formed behind him by Matthew Kadus, Connor Hoag and 800 specialist Andrew Niewiarowski. Loyola has the top 4 of a team that could compete for a top 5 finish at state, but their 5th runner could really make a difference for the Ramblers. Some candidates to look after include William Shortal, Aidan Sullivan and Case Brennan. Loyola runs well at the end of the season, so keep an eye on this squad to make some noise in a very congested Chicago Catholic League.