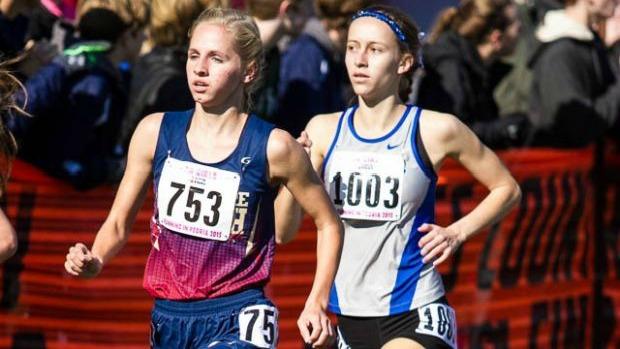 Jenna Lutzow (#753) has tremendous range from 400 to 3miles. She may also be tired of second place finishes from last year's 2A xc championship and this past spring in the 800 (Colin Boyle photo)

Head Coach/coaches: Ken Husser/ Drew Pivoras, Erin Foster, Molly Scheidegger
Last year's finish: State Runner Up
Key returners: Jenna Lutzow (Sr.), Sabrina Elder (Jr.), Remy Bice (So.), Mia Rodriguez (Jr.), Chelsey Recendez (So.), Brinley Hefty (So.)
Projected top 7: Same as above
Newcomers: Olivia Zaluckyj, Alexandria Reza, Gianna Sagona, and Madison Diercks.
Coach Husser's outlook: We had a solid summer of training and look to be highly competitive in 2A. With Yorkville moving up to 3A, there will be a number of outstanding teams competing for the state title. If we progress as I hope, we have the ability to be in the mix. We have six of our top seven back from last year, with Jenna Lutzow having a great track season and finishing 2nd (2:11) in the 800 Meter 3A race.There are four talented freshmen that can compete to be in the top seven. We need to continue to improve our times and close the 1 to 5 split. Also, it will be interesting to see the competition between our runners and who will emerge to fill our number four/five slot.

Head Coach/coaches: Doug Ecker / Andy Franklin
Last year's finish: 2nd NIB XII Conference 10th place IHSA 2A State Meet
Key returners: Return four of the top seven with Grace Purcell 10th All-Conference, Tessa Brennan 10th All-Conference, Emma Ball 10th (KHS #5 runner @ state), Andrea Wells 11th (KHS #4 runner @ state); Along with much improved seniors Becca Richtman (All-state track), Sarah Daley (All-state track), & Abby Shaw plus sophomore Erin Ball
Projected top 7: At this point it would be is nothing but a wild guess. We have a dozen or more girls who could be in the top 7 by season's end. The eight girls above along with an incoming class of freshman who finished 2nd in the 3A Division of the IESA State Cross Country Meet will all be candidates for the top seven.
Newcomers: Freshman Rachel Richtman: Individual IESA 3A State Cross Country Champion and Lesley Viveros who placed 5th lead the list of newcomers along with freshman Bethany Duffey, Izzy Modatt, Emma Hockey, and Kendall Regnier.
Coach Ecker's outlook: We lost seniors Brianna Bower (Individual Conference Champion/9th place @ IHSA 2A State Meet) and Noelle Espino (29th @ State). The team's strength should be their depth. If all the girls can stay healthy (and so far this summer they have) this will be the largest number of quality runners we have ever had competing for the top 7 in the 30 years I have coached cross country at KHS. It will be mid October before we will have an idea of how good they can be as a team. The other question will be if any of them can develop into top of the pack runners which the team lost in seniors Brianna Bower & Noelle Espino.
8. Lemont
Head Coach/coaches: Tim Plotke / Stefanie Miller
Last year's finish: 8th- State Championship
Key returners: Bridget Kunkel (sr) Beata Drozda (jr), Celine Ratulowski (jr), Jacey Schickel (jr) Gianna Lopez (jr) Brianna Carlson (jr)
Projected top 7: Bridget Kunkel (sr) Beata Drozda (jr) Julianne McClatchey (so) Celine Ratulowski (jr), Jacey Schickel (jr) Gianna Lopez (jr) Brianna Carlson (jr)
Newcomers: Julianne McClatchey (so) Cassandra Hamilton (fr)
Coach Plotke's outlook: It is definitely going to be difficult replacing the three seniors (from last years top 7) that graduated. However, we are returning four girls who have state meet experience who are eager to continue improving the team's performances. Summer training has gone real well. The girls have put down a tremendous aerobic base along with the occasional tempo/threshold runs. I think our strength, once again, will be our ability to run together as a pack
Tweets by MilesplitIL