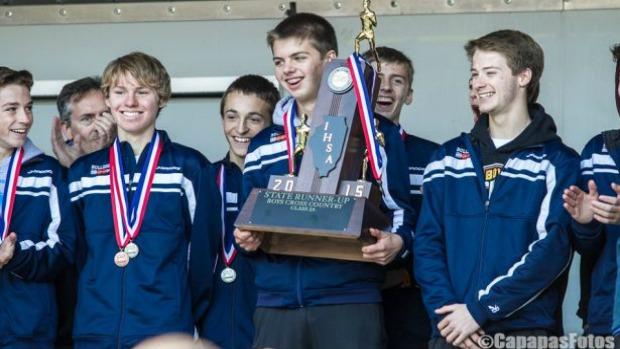 Ray's Take: All-State Stephen Poorten was Sycamore's lone representative in Peoria at state after a good 2015 Sycamore team finished 7th in the tough Woodstock North Sectional. Poorten is the #1 returner in the class of 2018 and NIC-Big 12 defending champ, and looks to bounce back after an inconsistent track season. Sycamore returns almost its entire team, and as a result, stand a good chance to join Poorten in Peoria. "This is our deepest team in recent years," exclaims coach Michael Lambdin. Lambdin projects that as many as 10 upperclassmen, as well as a couple freshmen, can compete for a top 7 spot on a good Spartan team.

Connor Farrell and Jake Carani lead a pack that hopes to make a charge after last year's 3rd place at NIC-Big 12. Among several others, those two can be joined by Quinton Benzschawel, John Lerohl, Riley Melton, David Lerohl or Lucas McKay. The depth of the Spartans can prove to be an advantage as they run a handful of deep meets that includes their home invite (Sycamore Invitational), First to the Finish, and the Rock River Run. Lambdin knows this teams potential: "We would like to improve on last year's 7th place finish at the Woodstock North Sectional hopefully resulting in an opportunity to race at the State Meet."

Ray's Take: Alleman High has shown it can compete among larger schools after the multiplier, finishing 7th at the extremely deep Normal (University) Sectional in 2015. Based on this circumstance, Alleman and coach Stoll have their sights set on the Western Big 6. Stoll: "Rock Island Alleman is a small school (1A) which has been bumped up to 2A via the success multiplier so our goal is for both teams to win their conference meet.  For the boys team this would be a 6th straight Western Big 6 title.  After that, we face very difficult 2A fields at the Sectional meet so we are realistic about our chances."

A state berth is not out of the conversation, however, and this is assisted by the front end strength of Augie Darrow and Spencer Smith. Other proven scorers are Ben Weaver, Brendan Hird and Connor Sheley. Some roster turnover means that Alleman will have to search for the depth to continue competing with mid-Illinois 2A programs but the Western Big 6 belongs to the Pioneers of Rock Island, Alleman.

Ray's Take: The Tigers feature a strong top two in Cole Barkocy and Weston Sterchi. Barkocy has been on the radar his entire career at Central, running all-state in 2014 as a sophomore. Sterchi has come on strong as of recently and will hope to have an all-state campaign on his own in 2016. Brandon Tomasello and Josh Johnson join Barkocy and Sterchi on varsity but need help on the back end. The help will likely come from Tyler Tomasello and a pair of sophomores Jack Flyyn and Nate Kopp. CLC runs in the extremely competitive Fox Valley Conference and broke into the top 5 in 2015. If the pack can come closer to Barkocy and Sterchi, CLC will improve on that mark. The Tigers return 10 of their 12 varsity runners from last year's roster so watch for this pack continuity to benefit them later in the season.

Ray's Take: For the second year in a row, Peoria Notre Dame will be putting a very experienced team into meets this year. A big gap exists between their first three runners: Patrick Bruch -who could be all state, Mitchell Maushard, and Jade Baille are the top three Irish runners. Their pack will be determined by Tony Haddad (who ran state last year as a sophomore), John Couri and Thomas Kortz. PND is also the defending 2015 Big 12 team champ and will have to fight off the pack from Danville. Bruch enters the season as the #1 returner from the conference meet.

Ray's Take: Having your first runner score 1 point at most races never hurts, and that is exactly the privilege that Prairie Ridge will enjoy during Filip Pajak's senior year. Prairie Ridge, another strong northern Illinois team, runs against most of the top individuals in the state frequently and Pajak holds his own with the ranks of the best in Illinois- expect him to be sharp when Peoria rolls around, and do not be surprised if he wins the state title.

The Wolves are typically neck-and-neck  with the other Crystal Lake schools (Central and South) and this year will prove to be the same in a race for the Fox Valley Conference now that Grayslake has vacated the conference. A very competitive team joins Pajak: Mike Ostow, James Lasak, David Tukle and Brian Dorn are a good pack with the chops to compete in the Woodstock sectional. If these runners can dip into the 15 minute range, they could take one of the five qualifying spots. Shutt: "We return a strong foundation of experienced athletes that put in a consistent summer.  We need to race more aggressively and with greater confidence in order to challenge for a title."