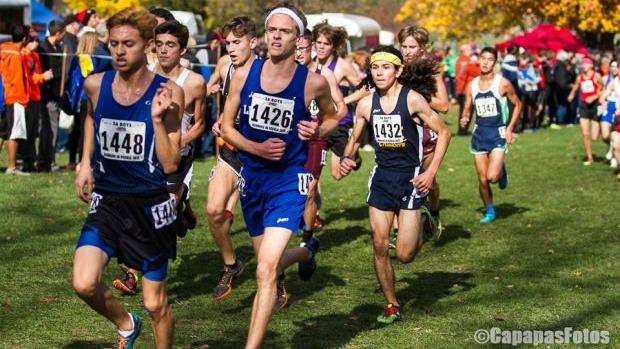 Ray's Take: The Tigers of Elmwood Park rallied at the end of the year and made a top 20 appearance at state in 2015. After graduating most of the varsity team, however, they look to new runners to lead them to state. "We graduated our 1,2,3,7 runners and that's a lot of talent, but it was even more leadership, which is something we will need to develop if we want to be successful," says Coach Patrick Sheridan. "But we do have a young and hungry group, and good teams don't rebuild, they reload!"

Elmwood Park reloads with Amadeus Lopez, Devon Schumann, Justin Nieves, Carlos Sanchez and Alex Martinez looking to be the likely top five. The Tigers have a good shot to make the state meet out of their sectional, but will need some front running power to make another top 20 performance at the state meet. Sheridan: "This year we look to grow as a team and are focused on winning the conference and regional titles and to compete for the sectional championship and to qualify for state as a team for the 4th year in a row and crack the top 20!  But success or shortcomings will be determined by the commitment of the runners.  This year will be a journey for all of us, and we can make it through but only if we work together!"

Ray's Take: One of the best 1-2 punches in 2A belongs to Sterling, who showcases Jonathan Landis and Jacob Gebhardt, both runners who can be all-state and both runners who can dip into the sub-15:00 3 mile range. Mikio Martinez and Isaiah Moorman, both sophomores, join those two on varsity as well as Bryce Tessman, a senior middle distance runner from South Carolina who will likely make an impact on the varsity level.  Possible top 3 NIC-Big 12 team, the Golden Warriors look ahead to the postseason. Coach Hendrix: "Our goal is to qualify for state as a team, we have a solid top 5 and it should be an attainable goal."

Ray's Take: Riverside-Brookfield (RB) finished 2nd at their home regional and just outside state qualifying in 2015. They return six of their top seven and will look to get their pack closer to top runner Mateo Nunez, who finished 40th at state and may be an all-stater this year. The experienced pack of Connor O'Brien, Jack Sagan, Jacob Wardzala, Matt Zamudio and Matt Armenta are a 30-second pack and could squeeze their way to a state qualification. Much of the pack graduates this year-so 2016 will be a golden chance to make it to Peoria.

Ray's Take: A top-10 team last year, the Warriors from Wheaton Academy are led by a hungry Jonah Jones who barely missed the all-state mark finishing in 27th in 2015. " Jonah Jones has put in 500+ miles and after just missing out on all-state last year, and this year he wants to get that honor," reports Coach Felinski. Jones is joined by Jimmy Ridge and Jeffrey Ridge for probably varsity runners, but a gap exists after. This gap should be filled in by Ryan Wittstock, Ryan Lotz, Will Lyon and Rylen Hershey. The Warriors currently hold the championship in their division of the Metro Suburban, but Illiana Christian will join Wheaton Academy and surely will challenge their their group. Watch for Wheaton to take advantage of their sectional and qualify for state again.

Ray's Take: Charleston's good 19th place showing at state marked their third qualification in the four years, but graduating top runners may make this year tough. "Our goal will be to make the fourth trip to state in the last five years, but it will be tough considering we lost out top three," says coach Derrick Landrus. "Everyone will have to step up in a big way." The Trojans do return a handful from last year still, namely Nick Oakley, Austin Ames, Ryan Chambers and Clayton Redden, with Oakley leading the way. Charleston will have to dig deep past those first four, however, and could get help from a number of upperclassmen runners Lance Niemerg, Spencer Stowell, Jonathan Phillips, Dylan Smith or incoming freshman (Isaac Miller, Nic Stiedl). Keep an eye on the maturing process for Charleston this year.

Key returners: Graduation was kind to the Green Wave of Mattoon, who lost only two of their top 12 runners from 2015. The team of Jake Ghere, Mitchell Kremer, David Thompson, Greg Thorne and Gavin Prior will have to work to run as a pack to find success. Kremer is the top returner and is followed closely by Ghere, one of the top returning sophomores in 2A. Coach Schaefer says a trip to Estes Park, Colorado helped training this summer as a unit and forms their goals for this year. Schaefer: "State is a goal for us for sure, and we hope to place high in the regional as well as win conference this year. Apollo is a really competitive conference but it'll be anyone;s race and it's our team goal to take it."