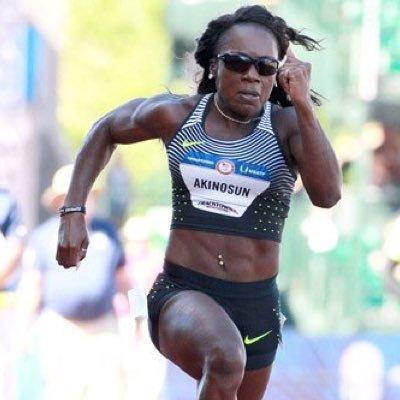 Can you tell us a little about yourself, and your family heritage?
I'm Nigerian by birth, born in Lagos, Nigeria. My family moved to the US in March of 1996 when I was 2 years old. I'm the middle child of three girls. I was raised in a Christian home and the church. Both of my parents are pastors.
How did you get your start in track and field? Did you play other sports prior to focusing on track?
I played soccer before I started to run track, but it wasn't serious at all. In seventh grade, the first year you're allowed to run in middle school, I simply went to the track team because my older sister, Moriyikę, ran track and had the middle school record (at Thayer J. Hill Middle School) and I wanted to break it.
You were first noticed competing with the Aurora Flyers as a youngster. What was that experience like in such and competitive environment?
I starting running with the Flyers in the summer of 2007, it was right after my first year running track. I don't think I appreciated the highly competitive environment or all the elite athletes around me at the time. Track was still just a fun thing for me, not that it's not still fun. I just didn't take it as seriously - I think that really allowed me to fall in love with running and the sport.
Coach Thomas Boatright is one of the best ever. What does he mean to you?
I believe God puts certain people in our lives for a reason, and I'm so thankful that Coach Boatright was, and is, a part of mine. He helped mold me into the type of athlete that could train hard, take criticism, and perform under pressure. He believed in me and saw a greatness in me that at times I did not think was even possible. I believe that talented people can always find a way to shine, but I don't think I would be shining this bright if it were not for him.
You had a stellar high school career including a monster senior year in which you tied the all 100m record. What was the feeling of 2012 like?
2012 was a dream come true, I remember being injured at the Upstate 8 Conference meet 2-3 weeks before the state meet and not knowing if I was going to be able to run. I remember throwing my arms up at the finish line in disbelief that I had actually won. I remember reading, and I'm pretty sure I still have, the article that you wrote about me calling me the greatest sprinter ever in the state of Illinois. I have a few races saved to my computer that I watch anytime I need a confidence boost. The majority of them are from Texas, but that race has continually made the cut.
You started at Illinois and then transferred to Texas. Were there any mixed emotions in moving out of your home comfort zone?
My transfer to Texas seemed like it happened so fast. One minute I was at the US junior meet, the next I was on an official visit to Texas, at the Pan Am Junior meet in Colombia, and then I was enrolled at Texas. I always wanted to be at a school in Texas, just not the University of Texas. I had no mixed emotions, I was nervous-excited. But I had my coach and my friend, Ashley, with me which made it easier. There were some moments where I would look up and think, 'I'm really at the University of Texas right now.'
What did you get your degree in, and what do you plan on doing with it after your pro career is over?
I graduate in December with a degree in biomechanics. In the future, I would love to work with Paralympic athletes, or amputees in general, and help them find the correct prosthetic to best fit their needs.
Was becoming an Olympian always a goal of yours?
I'm not sure I can say it was always a goal, but it was certainly always a dream. I fell in love with the Olympic Games in 2008 when I was 14 years old and I wanted to go. Before the 2012 Olympics, 2016 became a goal and not a dream. It was feasible for me if I worked hard. I just don't think I realized exactly how much work and how hard I would have to work to get here.
Tell us about your initial professional running career. How were the travel, people, food, and anything else you'd like to share?
Before the Trials were even over, my agent, Claude Bryan, let me know I was in three meets in Europe over the next two weeks and once again I was excited-nervous. This is, literally, my dream job, running to make a living, and it was actually happening. The food was hit and miss. Some days I loved it some days I hated it. The people were awesome. Everywhere we went there was someone asking to take a picture or sign an autograph. The athletes on the circuit were helpful and welcoming. The track and field "circuit vets" that I knew from being a true "track head" made sure I knew what I was doing, and where I was supposed to be when I was supposed to be there. The language barrier in Monaco and Budapest were extremely challenging - Budapest more than Monaco.

We know that your former college teammate Ashley Spencer made the Olympic team. What does it mean to have your best friend joining you?

Ashley and I have been together and gone through so much together. There were tears in my eyes when she crossed the finish line in 2nd place at trials, I may have been more happy for her than I was for myself. There's literally no one I would rather share the experience with.