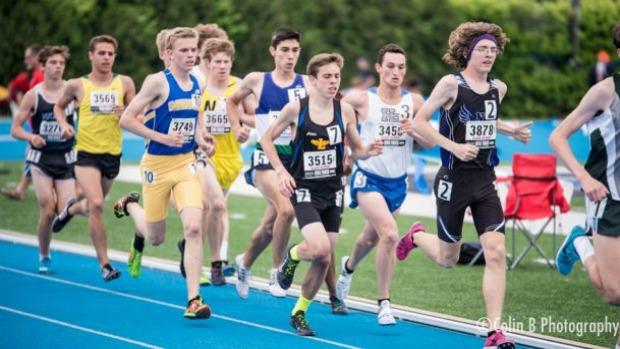 This weekend will be the last stand in terms of high school play that will involve relays, field, and open run events for the 2016 outdoor track and field season. Several Illinois athletes have trekked down to Greensboro, North Carolina to participate in the NBON. Several of the country's top long distance runners will compete Friday.  The 5000 is the big one that will take place under the lights. Current US #5 Matthew Young (Jenks OK) will take on the 2nd-ranked runner in the nation from indoor season, Aaron Groff (Cherry Hill East NJ).  Also posting big times indoors: Connor Lane (Cardinal Gibbons, US #5) and Joseph Trojan (University School OH, US #6). Throw in David Principe (La Salle RI) for good measure.

The Illinois boys will be represented by Martin Barr (Sr., Niles North) and Brett Davidson (Sr., Highland Park). Barr is the latest Viking to enjoy success. He placed 37th in the 3A xc championship with a personal best of 14:42 for 3 miles on the historic Detweiller course. Barr earned all-state honors on the track placing 4th. His personal best 9:12.58 was the 9th best time in the state. Barr won the prestigious Prospect Knights 3200m as well as the Illinois Top Times 3200m... Davidson enjoyed a great senior year just like his Central Suburban League foe Barr did. Davidson won several big meets along the way in cross country to an all-star campaign. Davidson ran 14:40 in taking 14th place in 3A state. It didn't there though. The Boston University signee ran 9:13.15 for a personal best in the 3200m. He also copped the 9th place spot securing all state honors in track.

Caitlin Shepard (#3507) felt the effects of the heat from the state championship; look for Shepard to get in one more great race before moving on to college (Mark Capapas photo)

Caitlin Shepard (Sr., Lake Zurich) is running in her final race as a prep and she should be more than motivated after a 20th place finish in the 3A 3200m final. The University of Kentucky signee has a tremendous record over the years and this season was exceptional. Shepard competed in the NBIN in March and ran 10:51.22. Although Shepard has not run a 5k on the track she should be among the favorites somewhere.

Jessi Larson (Saline WI) and Maria Coffin (Annapolis Senior MD) have the best outdoor times in the field, as they rank US #3 and #5, respectively, right now.  However, you have to figure that Kelati is the girl to beat after winning this event at NBNI in national-record time.  Foot Locker Finalists Nikki Zielinski (Canyon Anaheim Hills CA), Jenks, and Logan Morris (Spartanburg Christian SC) should also contend.  Grace Ping, the 7th-grader from Minnesota who has run 10:31 and 5:02 this spring, will be in with the high school runners this weekend (she's used to that, though, as she is allowed to compete for her high school varsity back home).  She will run the two mile also, but this is likely her better chance to compete well, given her cross country PR of 17:17 from the NXN Heartland Regional and 17:25 at NXN Nationals.