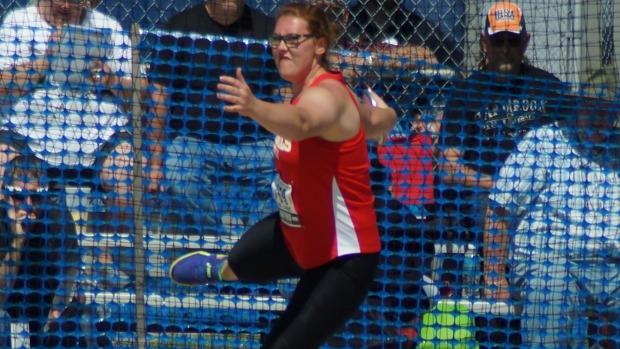 KD Young completed her day with two qualifying marks in the shot put and discus throw heaving the ball 50-4.75 and 140-3 (Dan Chamness photo)

The opening day of the state championship was met with more taking care of business and go home. A hefty percentage of the teams and individuals which compose Class A are within a stone's throw away and usually sleep in their own beds at night. Plus, with a lull in between competition why not air it on the track and in the field. Jenny Kimbro (Sr., Caitlin Salt Fork) was scheduled to compete in four events. She garnered the top seed in the long jump (17-8.25) then moved over to the 100HH and busted the competition with a fast time of 14.44. It was as if her competition was standing still. But guess what? The best was to come in the 300H when she rocketed out of the blocks against a slight headwind and punished the field. Kimbro did not show any signs of faltering despite hitting one hurdle on the northwest curve. The result was a new state class meet record in 42.57.