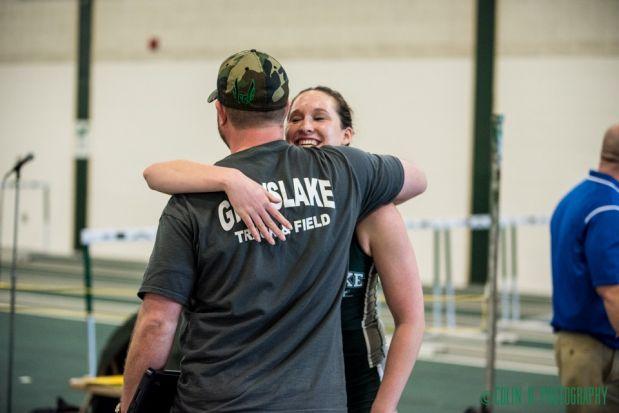 Katie Schroder and her coach share a moment at Top Times

Everything begins with the field events-

Pole Vault: The emergence of Katie Schroeder (Sr., Grayslake Central) has been evident from the beginning of the season as she was tabbed one of the best. Not a thing has changed and the only blemish on her record from the Fox Valley Conference Championship was erased last weekend at the Buffalo Grove Sectional. Schroeder who has an impeccable approach beat Alyssa Morello (Jr., Lake Zurich) and Savannah Howie (Sr., McHenry). The Oak Park-River Forest senior Chisom Nwoko is also a great sprinter had to limit running duties last weekend. However, she was able to get through the vault and should be a force in the vault (hopefully on the track as well).

High Jump: Jelena Rowe (Jr., Bloom Twp) is back to form after dealing with some demons that caught her off guard during the course of a long season. Rowe also plays volleyball and that demand has pulled her away from the track where her future will be. Rowe is the co #1 in the state at 5-9 and she will be tough to beat. Grace Daun from Wauconda is just a freshman. Hopefully she won't get too scary eyed in her first competition at state. Kameesha Smith (Jr., Thornwood), Jes Skudlarek (Sr., Prospect), and Alex Schmitt (Sr., Grayslake Central) are expected to vie for top honors. Ololade Ayoola (Jr., Lincoln Way East) is a strong threat as well.

Long Jump: This is the appetizer to the triple jump meal if you will. Yes, it is going to be fun watching Lajarvia Brown (Sr., Alton) and Jaimie Robinson (Jr., Homewood-Flossmoo) compete this weekend. Brown rates as #3 in the state at 19-4. She is also the sectional leader with a 19-3 mark. But she is a little cannon who at any time could explode and produce something major. Robinson on the other hand is just getting up to desired levels in her secondary event. 19-feet plus is in her favor and it could happen this weekend. Others such as the surprise of the year Maddie Manganiello (So., Downers Grove South) who leaped 19-6 is the state leader is dangerous even though she hasn't touched that mark on any other occasion. Hannah Morris (So., Bloom) is another Trojan with a ton of potential who simply needs to stay focused on track. Morris has skied 18-11 twice this season.

Shot Put: The 2014 state champion Courtney Morgan (Jr., Metea Valley) breezed through her sectional and bears the top mark this weekend. Morgan won the Top Times title with a solid 46-6 and is the overall 3A leader with a 46-9 effort on her record. Morgan will be tough to beat in Charleston this weekend.

Discus Throw: Indiana State University bound Jada Jackson has been throwing well all season. At the Lockport Sectional last weekend she had all measurable tosses beyond the 140-foot mark. Being consistent is the key during the prelim round and producing good carry over marks makes Saturday much easier to handle. Nikki Freeman (Sr., Cary-Grove) will double back from the shot put to challenge Jackson.

Triple Jump: The event that everyone will be watching is this one. The power rankings over the past year has been Lajarvia Brown and Jaimie Robinson. These lady titans come in as national and international elites. We could see the state record go down. The simple fact is who is going to come out victorious?! Let's review this after Friday afternoon