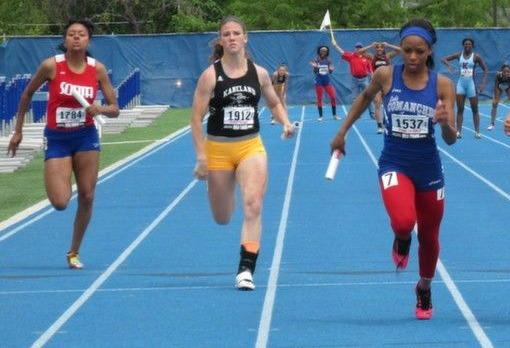 Speed and relays will be hot on the track-

Mariya Hudson (Jr., Cahokia) is on the verge of becoming her own legend after earning a triple crown last year. More of the same could be on board unless someone can top the whopping 55.42/24.01/11.77 darts that happened to be ranked #2, #1, #1 in all of Illinois. Secondly, the motivation is winning another state title and holding off the challengers.

The 100m marks have been rather fast despite the lack of wind gauge readings. Hudson is #1 followed by Nicole Sreenam (Jr., Maple Park Kaneland) who is undefeated. Sreenam clocked 11.79 in mid-April on a weekend that was very weather friendly for track and field. Now let's see what she can do in Charleston where the climes are predicted to be solid. Gabby DesRosiers (Sr., Chicago North Lawndale Charter) has improved on her block starts and will challenge for a top three spot. Dunlap freshman Kiara Pauli enters the championship spotlight a complete novice as does her sophomore teammate Aanise Sajna. Both girls have flown under the radar this season despite putting up tremendous times.  Now it is prime time and a moment for the Eagles to shine.

Hudson will attempt to repeat in an event that turned out to be aces for her. She cruised at sectionals running a still solid 56.90. Overall this event is stronger than last year with the improvements of Elisabeth Drab (Jr., Arlington Heights St. Viator), Sreenam, and even DesRosiers has done well in her least fun race. The exciting part of watching this race unfold is who is going to challenge Hudson and who will be the first girl to break 55-seconds on Saturday.

The 200 could have been a trap race except when you see the blazing 24.01 by Hudson which is the fastest by an Illinois girl in two years. She is expected be repeat easily and after taking it light at sectionals only running 25.38 compared to DesRosiers' 24.89. The question is 'who has more to prove?' You can be the judge on Saturday. Others to watch are Drab, Whitney Ward (Sr., Brooks College Prep), Allie Heinzer (Sr., Maple Park Kaneland), and Sharon Mainor (Sr., Champaign Central). DesRosiers and Mainor were the only speedsters that got under 25.00 at sectionals.

Don't overlook the hurdles!  Let's start with the short variety: the 100HH. This was supposed to be a great year with seven of the nine state finalists returning. Six of them made their return except for fourth placer Chante Stonewall (Sr., Normal U High) who opted to concentrate on college basketball aspirations. Imani Carothers (So., Brooks College Prep) is the solid favorite and ranked #1 in Illinois at 14.21. She has impeccable form and smooth sailing over the 33" hurdles that look like match boxes at times. Aside from tripping over a barrier or a false start, it appears there will be no threat to Carothers repeating. Rayneshia Lewis is the only threat and certainly has the talent to upset Carothers but it is unlikely she can unseat the defending champion.

Some heavy moment in the 300H got things shaken this season with Grace Cronin (Sr., Oak Park Fenwick) coming in from 3A this season. Cronin placed second last year with a phenomenal time of 42.95. It was Cronin's falter at the line that allowed Miya Dorsey of Belleville East to win in 42.94. The pain of waiting a year is finally here and Cronin appears ready. The University of Notre Dame signee has the classification and sectional best of 43.84. Don't expect any slip ups. Brooks Prep senior Whitney Ward is good in the long hurdles and on the verge of a great performance now that she has less to worry about. Originally she was going to attempt the "Shamier Little" feat: 100HH, 200, 300H, 400. That idea was thwarted when one of her teammates went down with an injury at the CPS Championship. Jordyn Bunning (So., Vernon Hills), Gianna Salzbrunn (Sr., Montini), and Syd Heidtke (Fr., Woodstock) are among the favorites.

Dunlap, Cahokia, Westinghouse, Kaneland will shoot it out in the 4x1, 4x2, and a combination of 4x4 relays. The 4x8 will Tolono, Dunlap, and 2014 state champion Washington duel.