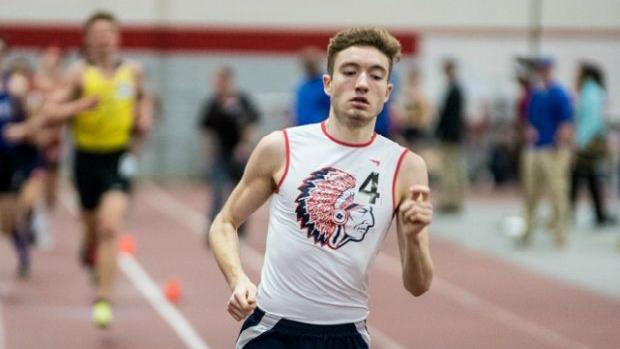 Guess what? We have another distance running love fest coming to your face. Since high school track and field encompasses nearly 80% of the running events why not drop something for the long footed athletes and fans in the middle of the high school season? And since meets are getting cancelled left and right by speed minded head coaches and meet managers, we do know that DNP organizers Chris Quick and Joe Parks will not let something like WEATHER affect the outcome of their event. The climes are expected to start in the pleasant lower 60s at game time and dip to the 50s- perfect for distance racing.

Schedule of Events: The undercard will start at 7:00 pm with the following order of events. We will run these in the normal flow of the meet rather than on a set time schedule.

Saturday night in Palatine should be real interesting to say the least. Let's take a look at the fields:

The opening main event race will be the 800m and the championship section should be awesome. The state leader Connor McCue (Sr., West Aurora) is running the mile so the top looks will be deferred to John Partee (Sr., West Aurora) and Torrain Haughton (Sr., Maine East). Both stallions placed 3rd and 5th respectively last year in the 3A state championship. Partee may be gaining strength after being a team player during the indoor season though he ran 1:56.66. Last weekend at the Minooka Invite he clocked 4:16.79 in the 1600m. Partee has leg speed that will suit him well, running under 52 seconds in the 400m. It will be interesting to see how fast he runs in his outdoor debut. Haughton is expected to be one of the elite state runners in his senior year. He certainly has the credentials with a 1:53.76 on his record. Though the outdoor season has been a slow process because of weather and lack of top notched meets Haughton still clocked 1:56.4. Depth will be on display with Robert Kuhlmann (Sr., Lakes) and Demetri Panici (Sr., Lincoln-Way North). Both of these runners have improved in the middle distance game over the past two years, especially Kuhlmann who dabbled strongly in the sprints in previous years.

The fast section of the 3200m will prove to be better in the end than on paper. In other words the depth of Illinois distance running is here. Dan Santino (Sr., Chicago St. Ignatius) and Alex Keeble (Sr., Mahomet-Seymour) will lead the charge. Santino, who was an all-star in last year's state 1600m, has continued to sharpen his sword in the shorter races. It is a common belief that Santino's future will be the 5k in college so don't be surprised when he drops a blazing effort Saturday evening. Keeble ran 9:23 at the Arcadia Invitational several weeks ago. He is more than ready to give Santino a great test if not win it all. Brian Leonard (Jr., Palatine) has battled some injuries within the past year but don't let that be a reason to doubt his ability. Leonard will be a main figure this fall for his senior cross country season. But for now he is putting himself in the mix to produce a good race and hopefully it will spring board in a great follow up leading into the state series. Evan Mitchell (Jr., Lincoln-Way West) , Jeremy Adams (Jr., Chicago Jones Prep), Brett Davidson (Sr., Highland Park), Heath Warren (Sr., Springfield), and more will be lurking for great times.

The main event of any distance oriented specialty meet is the MILE. In this case it will the 1600m and it will be an excellent field assembled. Connor McCue (Sr., West Aurora) is the state leader in two events and the latter he produced a sizzling 4:11.84 at Arcadia. If you include the 1:53 and aggressive style of racing McCue will be real tough to handle. However a tough field is in order with Sean Torpy (Sr., Sandburg) and Jon Davis (Sr., Oakwood) entered. Torpy is a winner and certainly one of the best in the state and nation with a 4:09.85+ personal best. There is no way he or Davis is going to concede victory to McCue. Davis is US #2 in the 3200m (8:51.17) with a big racing engine. Please keep in mind the cross country All-American has clocked 4:09.93+. Jack Aho (Jr., Grayslake Central) won the Illinois Top Times title, Jared Borowsky (Sr., Stevenson), and 9:06 man Blake Evertsen (Jr., Hinsdale Central) will be ready to roll.