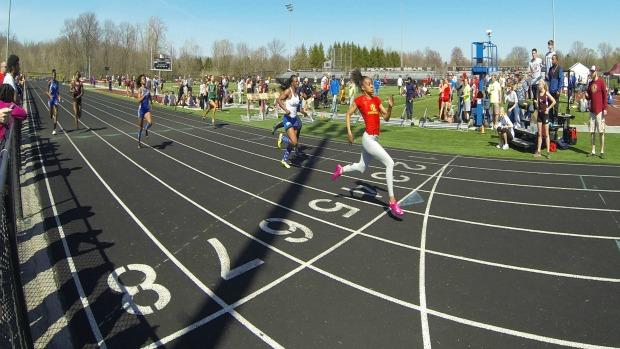 Ahh yes! The weather is going to be beautiful in the lovely city of Indianapolis, Indiana. It is always a good sign when you see the trees in full blossom and bumble bees flying around pollinating as only nature would have it in the spring. Yes, it's going to nice and warm this weekend. Meet director Alfie Hernandez said it best: "We are looking forward to hosting the 2016 MWP.  We have 700 athletes from 33 girls teams and 32 boys teams participating.  Schools from three different states will be here.  Plus, it is going to be the usual 70 degrees and sunny in beautiful Lawrence Township! Bring your sunscreen!"

It could be Jenny Kimbro time again-

Jenny Kimbro (Sr., Jamaica Sidell) busted out here last year with two hurdle wins and a second place in the long jump. The University of Iowa commit is now a multiple event state champion and state head liner. Kimbro is leading the state of Illinois in the 100HH (14.34) and 300H (43.75). The concrete meet records by former Evanston legend Shalina Clarke should stay intact (13.52/41.41). However, look for Kimbro to lower her state best marks though. But there may be a familiar name who could stand in the way of Kimbro's dominance. The name Addison "Addi" Coy is a person of interest. Coy was a centerpiece for her former Barrington team last year. Coy transferred over the summer to Culver Academy. Coy's best 300H time is 43.30 followed by a heavy workload in other areas.

The newly minted University of Wisconsin signee Gabrielle Desrosiers (Sr., Chicago North Lawndale) will look to supplant her older sister Briyahna's exploits from 2014. Briyahna and Brooks standout Ebony McClendon dueled on Hoosier turf in the 100 and 200. It was a virtual split decision that set up the sprint queen status later in the year. Little sister Gabby has been very dominant at times in 2016. She will contest the 100, 200, 400 as a major test in lieu of the state championship series. The only real threat will come from Bloom senior Kierra Griggs in the 400. Griggs is a proven veteran and will be at her best in the one-lapper.

The boys could get it going right away-

Hopefully the 100m seed times are on point. Luckily prelims are in place to keep order and respect. Jeremiah Davis (Collins) is ready to roll outside after a great indoor season in which he was victorious in the 200 at the Illinois Top Times. Davis ran a quiet 10.98 last year. The 200 is his best event and he could be threatened by Mitchell Burton (Jr., Columbus North).