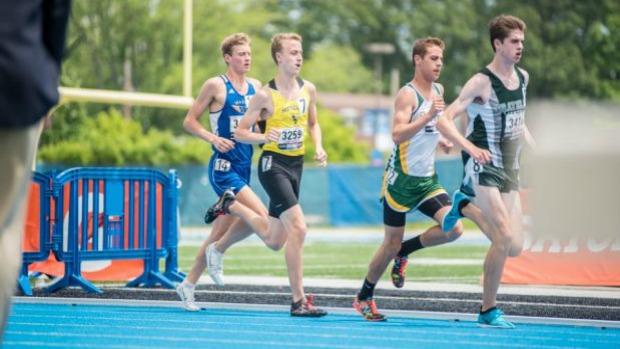 Outlook: The 3200 has definitely not lacked in excitement and achievement. Jesse Reiser, who was last year's 3200 champ, became the third 3A runner to run under 9:00 here in just three years, although several more have hit that barrier at meets like the famous Arcadia Invitational in California. Six of the top ten finishers from last year's final return and they bring some fantastic personal bests to this race.

Let's take some time to examine the end of last year's cross country season, first, and see why some recent heartbreak may give us insight into the motivation to the favorite, and top returner, in this race.

At the 2015 Lake Park XC Sectional, all of the top runners and teams rolled in predictably quickly, making for an incredibly exciting and memorable qualifying meet. However, one notable name in particular was absent from the top of the results, and instead occupied the final place in the race: Irwin Loud. The Oak Park-River Forest junior ran as a favorite in every race he competed in and entered the sectional race as a strong candidate to go on to win the state meet. His qualification status was an afterthought, but dehydration issues had other ideas. Loud's race lead shrank from a 30+ meter headway over Charlie Kern to a shoulder to shoulder race, and he continued to fall back until the entire field had passed him. Inexplicably, we were without Loud at the cross country state meet, which proved to be one of the loudest absences imaginable.

Lightning struck twice, however, and Loud suffered a similar fate in Terre Haute at the 2015 NXN Midwest Championship qualifier. The first returner from last year's final missed most of the post-season, and now will come to the track with a sour taste in his mouth. Loud also starts the season with the respect and recognition that he may not have had last year- it took an incredibly courageous run at Reiser from Loud for Illinois to respect Loud's bold hard-from-the-gun racing style. But that is exactly why Loud is the man to watch in this meet. No one has found a way yet to combat a healthy Loud gaping the field early in the race and forcing a nerve-wracking pace. He is the top returner, has fire in his belly, and is the favorite to win the 3200 at state this coming spring.

Kevin Salvano may have a different result in mind, though. Salvano beat Kern by two seconds at Detweiller in a year of overwhelming parity and also enters with the fastest 3200 best: 9:04.79 at Arcadia. Salvano embodied nothing but consistency during last year's XC season and won all his races sans a 2nd place finish at the rainy Schaumburg Sectional. During track, he finished all-state in the 3200 (8th) but the hot May day kept him from running close to his best (9:22). In 2016, look to see Salvano compete often as he did last year, and enter the state series with some strong 3200/1600 times (and a possible double. We have had attempts at the triple crown three years in a row now).

The Arcadia meet last year also gave Blake Evertsen his 3200 best of 9:14.39. A 14th place finish at state may have been slightly disappointing but Evertsen returned in cross country, and established his position at the front of results in every race. A fourth place finish six seconds behind Salvano at the cross country meet is not too bad, and Evertsen looks likely to run the 3200 in the spring. We have to include him among the favorites.

The XC to track season transition also drags a number of talented 2A runners from the XC scene who are competitors in this race. Most notably, Jack Aho broke out in the 3A 3200 last year with a 3rd place and fulfilled his favorite tag at Detweiller last year with his first state championship. The second place finisher in the 2A XC meet, Charlie Nodus, is one hand of the state's best 1-2 punch from Hinsdale South. Nodus also has a 3A All-State title to his name, a 9th place in the same race. Eryk Yunk finished 10th behind Nodus and nabbed a 5th place XC spot as well. Along with these 2A guys, do not be surprised to be 3rd and 4th place XC men Roman Drabchuk and Filip Pajak make an impact on this race as well.

A few questions marks remain about potential championships contenders for this race. Lake Zurich main man Matt Pereira suffered an inconsistent at best track season plagued with sickness and was almost completely absent from last year's state meet (running only the 4x800 for his Bears team). Pereira will likely follow the plan he used two years ago and double the 3200/1600 but along with his teammates the Griffith twins, Lake Zurich could run a strong 4x800. Pereira cannot be ignored- especially with a strong come back last fall that drew his cross country season into December at the Foot Locker Nationals.

Sean Torpy (3rd) and Vince Zona (6th) have the legs to hold their own in a 3200 as well, but typically have run down to the 4x800 with their pack-oriented teams. It may be likely we do not see either of these guys in the race but if we do, they are just as much contenders as the rest of the mentioned crowd.

Finally, we have one of the nation's top sophomores in the state and his plans are shrouded as well. Kern quietly (somehow) molded one of the most impressive freshman track resumes ever, hammering an indoor 9:28 3200 and coming down to a 4:18 1600 at Prospect Wanner Knight and a 1:55 run at a small meet in early May. If Kern chooses the 3200, his 14:22 3 mile chops suggest he has as good a chance as anyone to run away with this crown.