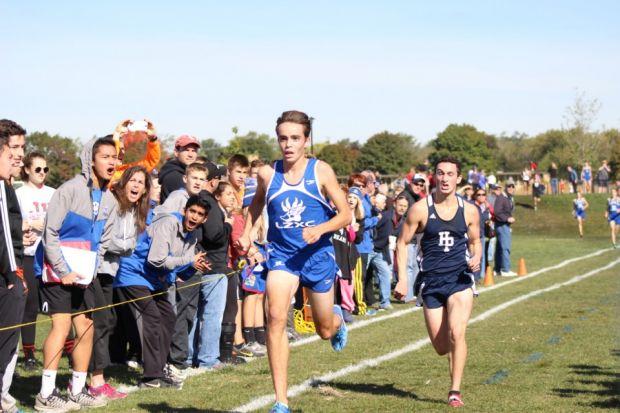 Coming into the meet several teams and individuals announced they were either going to rest their true varsity lineups or not participate at all. New Trier and Maine South waged a tough duel a few days prior which took them out of any consideration of serious racing. Buffalo Grove and senior Kevin Salvano declined an invitation to compete ahead of the MSL Championship. #12 Huntley and #13 Lake Zurich indicated they would scrap with their best runners. Specifically, Keagan Smith (Sr., Huntley) and Matt Pereira (Jr., Lake Zurich) spoke previously about giving an honest effort.

The race got out fast for the first half-mile on the layout that featured a short loop with several turns before heading out for the big loop. Smith moved up against the Lake Zurich trio juniors of Pereira, Brian and Kyle Griffith (twins) as well as Highland Park senior Brett Davidson. All four lads hit the first mile in a comfy 4:50. The modest pace allowed Lake Zurich to work out some of the back of the pack issues as the #4 and #5 men were in contention.

Pereira took over the second mile with his two teammates the twins along with Davidson who hit the checkpoint in 10:07. The pace had slowed which allowed a few others to gather themselves, one of which was Maine East senior Torrain Haughton. The Jamaican import is primarily an 800 meter runner competing in cross country for the first time. Haughton placed fourth at state last year running 1:53.76 and he has big plans for 2016 which includes the mile. "I think I can run 4:08," he said adding a forecast to what should be a great track season.

Haughton competed well but he was no match for Pereira and Davidson who separated from the rest of the leaders at the hill. Pereira needed every bit of his 4:15 mile leg speed to hold off a hard charging and gritty Davidson for the victory. Belvidere North senior Eryk Yunk caught a fading Smith somewhere in the final half mile to take fifth.

Lake Zurich ran gutsy for three miles as they were able to put four scorers in the top 15 and the fifth runner senior Nate Quinn finished 37th. The concern for the Bears has been the fifth spot, but if their top four finishers can continue to place high among the titans they may be able to get away it with a few flaws.

The word in the Huntley camp was "tired legs" but good training that should ultimately prepare them for a good run at state. Smith indicated that his legs were tired and he might have had a bit of a letdown after winning last weekend's Peoria Invite against a stellar field in 14:26.

Highland Park appears to be hitting their stride at the right time heading into conference play. The Giants are unranked and they surprised Huntley for second. The momentum produced here will add some depth to the competitive Central Suburban League that already has powerful New Trier and Maine South.