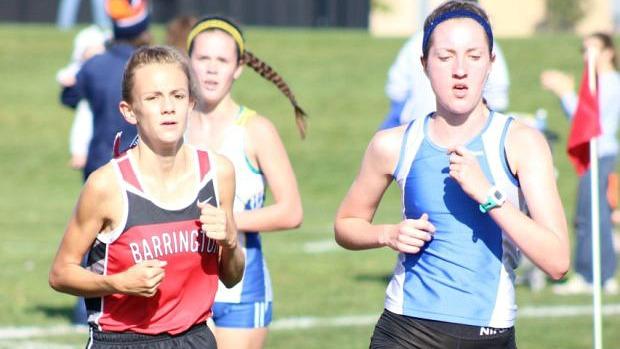 The cross country patrons were greeted at the renewed Heritage Park with sunny skies, light breeze, and an opportunity to watch some quality races. The Wheeling Invitational was moved from the All State Insurance corporate layout in Northbrook to its current situation in Wheeling. The fans were out in droves over the large expansive park which will serve as the upcoming Mid-Suburban League Championship on 10/17.

The girls varsity began the first run through which featured one short loop followed by two big loops that captured the perimeter of the park. Although the course could easily be mistaken as not fan friendly, it was very easy to view key movements of the race. So, the first mile saw loaded #9 Barrington and #5 Lake Forest squads leading the charge. Lakes senior Kortney Schardt and Lake Zurich senior Caitlin Shepard hit the first mile in 5:36 along with Barrington sophomore Jocelyn Long and Lake Forest Sophomore Emma Milburn who were just a tick or two in back. Elk Grove junior Emily Steomeier was also in the vicinity.

The second mile told a completely different story as Long and Shepard separated from the previous group and it was clear that one of these young ladies would be victorious. Long's teammates began to make their move against Lake Forest for the title fight. Senior Lauren Conroy helped out by catching Schardt giving the Fillies another runner in the top five.

It came down to the final half-mile that both Long and Shepard negotiated the hill and kicked home on the flats to the finish. Long got the better of Shepard leading up to the last portion of the race with some surge points. Long's time of 17:25 was solid on a rugged course. Shepard was able to hold on for a strong second in 17:33. Milburn was the first Scouts runner to cross the finish line in 17:47. Conroy and Schardt closed out the top five with respectable 18:01 and 18:10 clockings.

Barrington's powerful surge over the last mile proved too much for Lake Forest as the final results indicate. The Fillies walked away with 46 points to the Scout's 70. All five scorers finished in the top 20.

#10 Winnetka (New Trier) was in the field but the Trevians only ran one of their top seven girls junior Grace Fagan, who finished a distant 11th overall in 18:43. However, they were still able to beat #24 Lake Zurich despite locked at 123 points- a tie breaker on the sixth runner decided the fate.