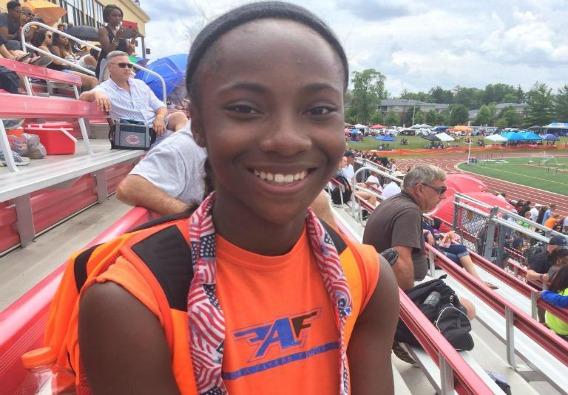 Sugar and Spice, twice as nice-

The famous reference to a nursery rhyme “Sugar and Spice is twice as nice” could easily be termed: Sweet like Cinnamon and rough like Pepper. This metaphor for spices at the same time is an oxymoron that current and future high school girls (some boys too) are going either going to love it or detest it. The description above is referring to the sweet “Cinnamon” 13 year old better known as Dajour Miles. Her mother Joy Johnson says Dajour acquired the nickname at birth “because when she was born, her skin complexion was beautiful like a cinnamon color.”

Dajour is a product of the famed Aurora Flyers Track and Field Club ran by the one and only Thomas Boatright. Coach Boatright has been at the forefront of the development of some of the elite track and field athletes in Illinois. He and his coaches have produced the likes of Shakeia Pinnick, Maya Neal, Tracey Drew, Morolake Akinosun, Kahmari Montgomery and many more!

During the recent USATF Illinois State Association Championship held at Illinois Benedictine University, Miles, a recent graduated 8th grader, made her introductory to the masses quite nicely. Dajour won three individual titles and assisted in the 4x400m relay- in outstanding times. The first event was the 100m in which she ran 12.41 (faster than any hs girl). That time doesn’t sound impressive or scary does it? Cool… Dajour took to the track several hours later and won the 400m in an unbelievable 54.99! That time broke the legend and now former Gurnee Warren speedster Brittny Ellis’ mark by several seconds. Ellis, as many of you now know, is one of the greatest female sprinters to ever come out of Illinois. Had Dajour been eligible for high school times she would have finished second in the 3A final and possibly closer in Ellis’ rear view. Lastly, it was the 200m that Dajour popped out in 24.10 that got fandom screaming “have mercy!” The super time is faster than former Lincoln-Way East superstar Aaliyah Brown ran as a pre-teen. But of course, this is not a comparison between Cinnamon and “The Franchise.” Time will tell if Miles will continue her continuum of greatness and follow in the path of her recent great predecessors. 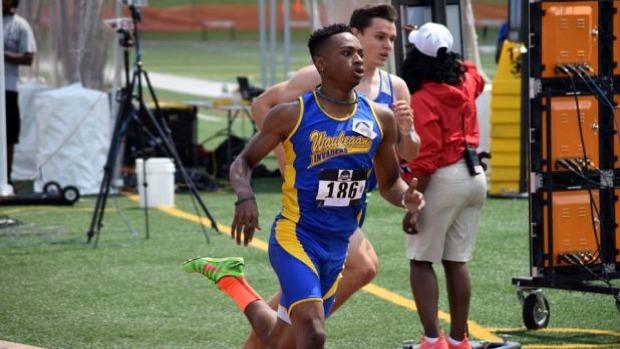 The World Youth trials was a thriller-

Shame on anyone who decided it was best for Illinois’ top 16-17 track and field athletes to pass on this event. For one, at the very least the competition was second to none (arguably and in most cases deeper than most state meets). Secondly, if you are a rising junior or senior you should have been here- especially if you have aspirations of competing for a national or international team someday. The fact that kids from all over the United States including the great states of Texas and California is incredibly telling. Thirdly and certainly not lastly, the second day of the meet fell on July 1. July 1 is the first day of the 2015-2016 calendar when college coaches can talk with juniors and seniors. But more on this later…

Josh Eiker (Galeburg) enjoyed a great junior year in which he moved from a rising junior to someone to watch nationally in 2016. Eiker won the 2A state championship in the 100 and 200 of course. He is looking to reach down deeper and put some marks out of reach. Besides running under 21 seconds in the 200 next year, he is assuredly adding the 400 to his event log. “I hoping to go in the 46’s maybe in the 45’s,” Eiker said directly without a pause. The Illinois boys continue to improve in the speed arena and Eiker will be at the forefront.

Emma Milburn (Lake Forest) and Caitlin Shepard (Lake Zurich) closed out their track seasons competing in the 3k. Milburn finished fourth in 10:32.34 and Shepard took fifth in 10:37.22. Now they both move on to cross country this fall. Watch out for this two outstanding distance runners.

Thomas Mosley (Zion-Benton) continues to improve in the 800m. He finished off his sophomore year with a fifth place finish in 1:53.96.

Lajarvia Brown (Alton)- It was year ago at this time that Ms. Brown moved from little known to a person who to watch in 2015. Despite winning the Illinois triple jump state title as a sophomore, it was the series of summer track meets that got her name out there. It was no different time. Her coach Asaki Carr said Brown is an incredible athlete. “Lajarvia is someone who can do anything once she puts her mind to it.” This seem to be true as she took on the tall task of competing in the Heptathlon and conquered it. Brown would up finishing a strong third place scoring 4793 points. If she would have finished in second place, the case for the world team would have been a strong one. But there was no doubt that Brown was getting her passport ready for Cali, Colombia and the world youth championships. “I want to jump 42-feet in the triple jump,” said Brown just after competing in the grueling multis. It was an exciting affair between her and fellow Illinois leap frog star Jaimie Robinson (Chicago De La Salle). Robinson is no joke herself as she was the 2A state champion. Robinson is now consistently clearing the 40-foot barrier. It was a delight to watch her and Brown duel 1-2 through five jumps as they produced 41.7.75 and 40-1.5 marks. Although it seemed the Illinois pair was destined to be teammates in Columbia, Tara Davis of California was lurking hard like a hungry lion. She had scratched on three of her five jumps but her runway speed was off the charts. “I had to move my steps back like five feet because I felt like I was too fast coming toward the board,” Davis said. On Davis’ sixth and final attempt it was PRESTO! She connected on a 41-10.75 winner that knocked a dejected Robinson into third and from any consideration for the world team. Davis qualified in her third event after the long jump and 100HH.

College coaches in the place to be-

As it was said before there were as many college coaches as there were fans. Well it seemed like it anyway. July 1 is considered opening season for colleges to talk to juniors and seniors. The main thing is getting themselves and their programs accustomed to prospective athletes. I had an opportunity to speak with coaches from Florida State, Kentucky, Georgia, Texas A&M, etc. The key message they iterated in these types of meets is building a resume. The World Youth meet and others like it are very important. I did pose a question to one recruiting coach regarding a 10.8 sprinter from a cold weather state vs. a 10.5 sprinter from a so-called warm weather state. "In the scheme of things it really doesn't matter," he said. "For example, each athlete has to be coached up. If I see a kid that is ranked 17th vs. a kid who is 6th and I tell my head coach that the 17th ranked kid comes from a cold weather state, he is going to say 'our competition is going to coach up the 6th ranked kid.'" So it appears that the super conference coaches know they have to recruit the nationally elite kids first to stay competitive. But at the same time they know kids who are just under the big radar as just as important. Another coach said "indoor track is big up North, so I would say take indoor track more serious. If you a jumper you have no excuse because you don't have to compete with weather or small turns on a track. You should be getting marks to build your resume up." Enough said.