The B Side has enjoyed himself the last couple of weeks at O'Brien stadium chillin' with my guys TJones, Abe Jones, and Jeff Bryant. You put us all together and the jokes in the press box should have us opening for Kevin Hart. Every time I walk in the stadium I get all hyped up like I'm about to run and it's 1986 all over again. You realize that you are at the State Meet and it's put up or shut up time. This is my view on both state meets and what's to come. I'm sure nobody will believe this, but this was the first boys state meet I've been to since 2010. The girls meet was just more interesting to me; they had better match-ups and story lines especially in sprinting. If you know me personally or have read my blogs you know that I'm hard to impress. I was impressed this year. Yeah, we knew the outcome of a lot of events (at least I did). I tried to tell you after indoor. 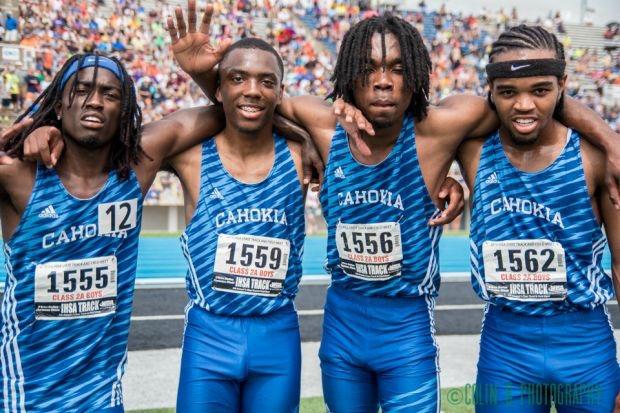 I missed Cahokia's 4x1 state record win (41.12) due to my credential being misplaced. I had to show them my BSide T-shirt to get in. So disrespectful; LOL. Anyway, I saw the video and they were rollin'. I saw the 4x2 and Cahokia blasted the field in a flawless 1:25.83- another state record. I sent the times nationwide to my boys in California and Georgia and usually they have some school times from their state to throw at me, but this year ...crickets and wow!! I'm curious to see what they run in the post season when they're challenged. 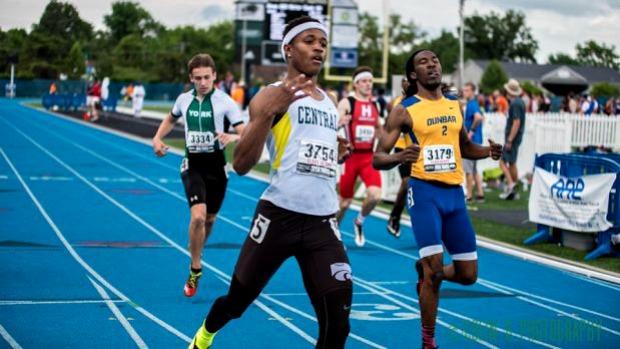 Kahmari Montgomery (Sr., Plainfield Central), I welcome you to the all-time great list of sprinters. He's got some ol' skool mentality in him and if I had a pitcher of Kool-Aid could sit and watch him run all day. I said all year he'd win everything and he came through with the triple crown winning the 100, 200 and 400 (10.50, 20.96, 46.24). The 46.24 broke the great Harold Leonard's (Chicago Mt Carmel) state record of 46.51. I sent Kahmari's times to my boys and they threw Ryan Clark (Georgia state champ) and Cali' state times but America needs to ask themselves a couple of questions. What would IL athletes run if we had their weather to train in? And what would they run if they lived here, training only a handful of weeks outside? IL athletes roll in spite of the weather which in my opinion makes us the best. Kahmari, you rolled boss! For me to say that you did is something. Good Luck at Mizzou.

The girls state meet turned out as my pre-season predictions were written. Brittny! Brittny! Brittny! Brittny Ellis did what was expected giving us the triple: 100, 200, and 400m wins (11.85, 24.38, 54.19). She made it look easy and now she' off to the U (Miami Hurricanes). I'll miss watching her in indoor/summer track. She will be missed without question. Put the tissues down and stop crying! On her way out, Brittny passed the torch to Cahokia's Mariya Hudson as the next woman to carry IL sprinting. Mariya tripled in 2A 100,200 and 400m (12.02, 24.64, 54.79) and she'll be a jr. She may very well surpass Brittny history-wise with two years to go. Lincoln Way East will 4 Peat in 3A!! This was the year to sneak them and the state as Dennis Green said famously. "We Let Them Off The Hook!" They are who we thought they were!" In '16 their horses will be seniors, and I wouldn't be shocked, and this is only my opinion, if Angelo Brown rides off into the sunset. I actually predicted this when "The Franchise" was a freshman. He will have done it all... I'm Just Sayn!

2016 looks bright for Morgan Park. They were this year’s runner-up in 2A and swept all the relays. They may be blasting LL Cool J' Mama said Knock You Out lyrics -- "Don't call it a comeback, I've been here for years, I'm rocking my peers, putting suckers in fear." They might challenge or even keep Cahokia from a 3Peat. Did BSide not warn you to watch Jaimie Robinson (Chi De LaSalle)? She went 40'0 in the triple jump and will be a junior. Imani Carothers (Chi Brooks) will be an experienced sophomore and looking to repeat in the 100HH.

In case you don't pay attention to the junior high ranks. Let me be the first to introduce you to Raven Moore of Springfield. I never met her, but she won the 400m in 56.82 not only breaking Mariya's Jr. high school record of 58.00, but the all time record of 57.04; then she won the 200m in 25.32 breaking the 8th grade record and sniffed Brittny's all time record of 25.25! The freshman could be a problem wherever she goes to high school. 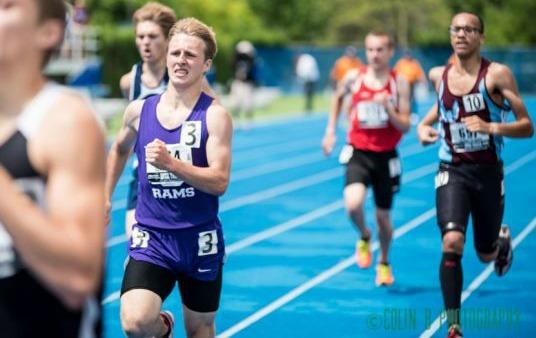 Lastly, if you read my blog "Fear of The Freshman" and "Sometimes The Journey is Better than a Title", I'd like to give a shoutout to Ryan Skowronski (1A Shelbyville). He shocked the world and took 8th in the 800m in 1:59.98... as a freshman and Brigitta showed what track is all about conquering leg injuries. She showed what hard work and dedication can do as she placed 3rd in the 400m in the Kentucky state meet. Proud of you both!