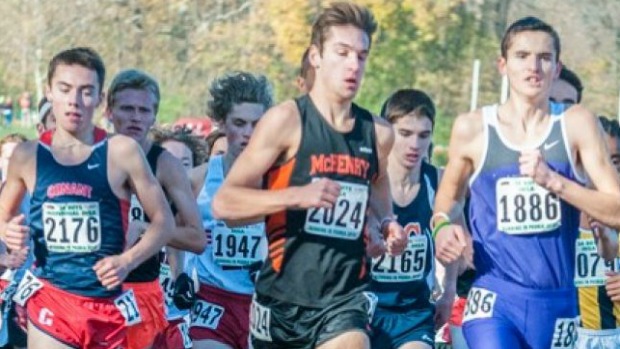 Zach Dale, Jesse Reiser, and Ryan Clevenger are key IL entrants looking to advance to San Diego on Saturday (Colin Boyle photo)
Kenosha, WI-
Meet Index
When the morning of the rites of passage arrives known as Footlocker Midwest held on the grounds of the University of Wisconsin-Parkside, the air temperature is expected to be 6*F. But hopefully by the time of the seeded boys race things will move more to the desired 32*F. As for the course itself, it could be very hard to navigate with recent snow that may change to mud in certain areas. All in all it should be a great time and good affair for all of those involved.
Key IL boy’s entries: Brady Bobbitt (Sr., Aurora Marmion Academy), Graham Brown (Sr., Palatine), Jack Carroll (Sr., Loyola Academy), Ryan Clevenger (Sr., Downers Grove North), Zach Dale (Sr., Hoffman Estates Conant), Jon Davis (Jr., Oakwood), Jon Klaiber (Sr., Naperville North), Dustin Macuiba (Jr., Gurnee Warren), Sam Oh (Sr., Lincolnshire Stevenson), Jesse Reiser (Sr., McHenry), David Rodriguez (Sr., Arlington Heights Hersey), Walmer Saavedra (Jr., Chicago Lindblom), Eryk Yunk (Jr., Belvidere North)
Something has got to give in this affair even though it is a qualifying race and wins and losses technically don’t count. But if you asked Dathan Ritzenheim back in 2000 when he faced fellow mates such Tim Moore (Michigan), Aaron Fisher (Indiana), and Dan Glaz (Illinois) would he be content on just qualifying for nationals the answer was probably a big “NO.” Ritz showed no mercy by going out in a suicide pace (in the observer’s eyes) that propelled him past two miles in 9:16 and then the three-mile post in 14:07. The end result was a resounding 14:35 victory on the UW-Parkside National Course for the Rockford, Michigan legend and later Footlocker National Champion.
Ritz’s course record appears to be immortal 14 years later; the current crop of stout competition will only be concerned with finishing in the top 10 and advancing to San Diego for the national finals… or will they?
There are three undefeated young men standing: Grant Fisher (Sr., Grand Blanc HS, MI), Jesse Reiser (Sr., McHenry HS, IL), and Olin Hacker (Sr., Madison West HS, WI).
Fisher is the defending regional and national champion who has raced sparingly at speeds that he wants to this season. The scouting report says Fisher will feel out the opening mile and go from there. But if some wise guy (s) chooses to go for a fast tempo he can work with that one to. Fisher has gone about his business of becoming the nation’s top prep distance runner over the past season plus racking up national titles and showing great range like winning the Adidas Dream Mile and competing in the IAAF World Junior Championships 1500m. This kid has some serious wheels at 4:02.02 for the full mile. The race on Saturday will be his to win or lose.
Reiser has adopted the same approach as Fisher this season in letting the race unfold and come to him. Jesse has tremendous closing speed just in case things get a little tight down the stretch; he completed a 4:27 last mile in his state championship romp. Reiser indicated that he is ready to meet the challenge of Fisher and the other contenders. He will attempt to become one of a few runners to qualify for NXN and Footlocker Nationals two years in a row.
Hacker comes from a winning family tradition that extends back to the 1970s with his uncle Jeff (1976 & 1977) and Bill (1984); and then his father Tim (1979 & 1980).  His older brother Sam was a champion runner just a few seasons ago for Madison West. For the young breed Olin the goal will be to get to San Diego. That task should be a piece of cake considering he is the fifth ranked returner and has put up some impressive marks this season. Hacker has been compared to former Wisconsin great Chris Solinsky who was regional champion in 2002. Solinsky went on to win the national title a few weeks later in that same year.
Other top athletes to watch for are Thomas Pollard (Sr., Gilbert HS, IA)- He is a returning Foot Locker All-American (13th) and 3A state champion by over a minute. Pollard will be seeking revenge in his only true loss this season when he fell to Hacker at the Roy Griak Invite in Minnesota; Will Lauer (Sr., Sioux Falls Lincoln HS, SD)- South Dakota 2A state champion, NXN qualifier from the Heartland Regional; Ryan Robinson (Sr., Waterford Mott HS, MI)- NXN qualifier from the Midwest Regional, 21st in ’13 FL final; Ryan Nameth (Sr., Verona Area HS, WI)- 2nd in Wisconsin D1 state meet; Ben Veatch (Jr., Carmel HS, IN)- Indiana State champion, NXN team qualifier. Maryjeanne Gilbert will get her first taste of national level competition at the Footlocker Midwest Regional
Key IL girl’s entries: Adrienne Brauer (Jr., Petersburg-Porta), Maria Brauer (Jr., Petersburg-Porta), Audrey Ernst (Fr., St. Charles North), Maryjeanne Gilbert (Jr., Peoria Notre Dame), Rachael Lau (Jr., Plainfield North), Maryclare Leonard (So., Chicago Marist), Vivian Overbeck (Jr., Vernon Hills), Brooke Wilson (So, Mt. Prospect [Prospect])
Illinois is surprisingly lean on the strength of entries this year with the omissions of many key runners. 3A state champion Lindsay Graham (Jr., Glenbard West), 1A champion Anna Sophia Keller (So., Effingham St. Anthony), and plenty others too many to name have opted to sit out. One name that is entered and ready to compete is Maryjeanne Gilbert. Gilbert won the 2A crown nearly a month ago. It was also her last race on record and the possibility of being rusty is a real fact. In addition, Gilbert is entering her first nationally featured race and it will be interesting to see if she can run with company. She has not been pressed beyond a mile this season. Her personal best of 16:12 (3-miles) was the second fastest time ever run on the Detweiller course in Peoria. It should translate into an easy entry to San Diego if Gilbert can maintain her poise.
USA #1 Anna Rohrer (Sr., Mishawaka, IN) has come full circle since winning the Footlocker title as a sophomore. In between standing on the cross country mountain top she has endured several career threatening foot injuries. After having surgery and missing what equates to an eternity (almost the entire 2013 season) she resurfaced and won the state 3200m crown and then New Balance Outdoor Nationals 5k title (16:16) this past spring. She has continued the momentum and run an all-time best at her state a few weeks ago. The course may be a little sloppy for Rohrer in breaking her Parkside course record 16:54. That would be great but the goal is to simply advance and move on.
Hannah Long (Sr., Eureka) returns to Parkside as a three-time state champion from Missouri and she is undefeated with a personal best time of 16:51 occurred this season. She is seeking her second appearance in the national finals- last year Long copped the 23rd spot in San Diego.
Watch for these girls: Stephanie Jenks (Jr., Linn-Marr, IA)- One of the top endurance athletes in American history in that she is a strong junior level triathlete. Jenks has incredible range from 800-6000m. She is an easy choice to advance to San Diego should she compete in the regional; Rebekah Topham (Sr., Griswold, IA)- A beastress on the track with good speed and flexibility as she has excelled in the hurdle races. However, Topham’s bread and butter is distance running. She comes in as the #3 returner and placed 16th last year in San Diego; Audrey Belf (Sr., Birmingham Seaholm, MI)- Lost her first race of the season at the NXN MW meet several weekends ago. Don’t fret, she surely has a new goal of adding the sunny climes of San Diego to her bucket list; Sarah Kettel (Jr., Capital Homeschool, MI)- The surprise winner at NXN MW for the homeschooled kid. Kettel will be a marked runner from the start Saturday in Kenosha;
Tweets by MilesplitIL