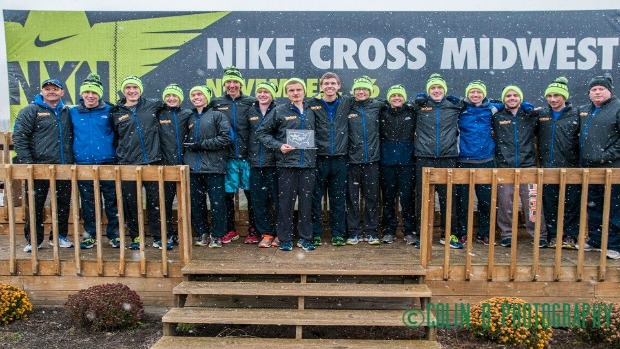 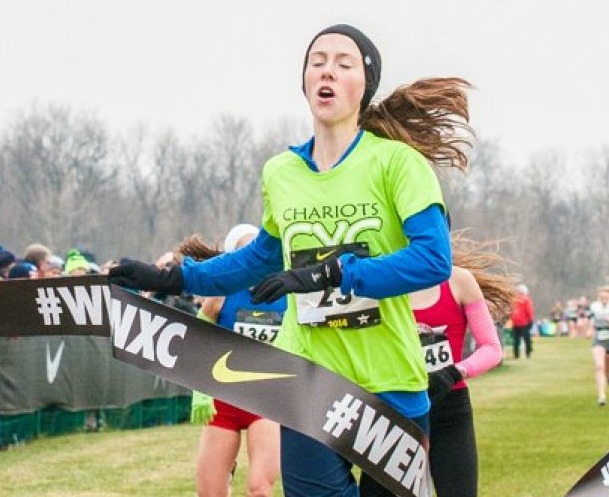 Indiana's supreme team US#2 Carmel had one goal coming into Sunday: return back to Portland. The Lady Greyhounds also known as the Carmel Distance Project did just that by winning with the slimmest of margins 103-113 over Naperville North. Palatine lurked very close behind with 119 points. The 34 second scoring spread for Carmel was precipatated by freshman Madelyn Dalton who finished 15th overall (10th in team scoring) in 18:03. Carmel knows the Indiana State University course very well with a ton of championship race experience in which they put on the layout. Since the Hooiser harriers run and think in kilometers, they also know exactly when to strike. That striking point is usually around the 3k mark. This is where the scorers tried to surge up the gradual incline and bury its opponents. However, Naperville North would not be deterred. The Huskies surged hard as well sticking together in bright neon yellow singets donned with long white sleeved shirts. Junior Judy Pendergast hung tight with Dalton before finishing a few strides back in the 11th scoring position (16th overall in 18:05). They essentially cancelled each other out. It was then a classic foxhole battle to the finish line that the Lady Greyhounds survived. It was by far their hardest test of the season and certainly one they are lucky to have won. As for Palatine, the Lady Pirates continued their marvelous season on the strength of a great front runner such as junior Kelly O'Brien. O'Brien took seventh overall in 17:50. Her teammates completed the 51 second scoring spread and easily defeated Michigan's top team Birmingham Seaholm who tallied 195 points. The waiting game for Palatine should be much easier and less stress in terms of receiving an at-large bid in less than two weeks. The Lady Pirates resume and body of work is more than solid this season compared to last.

The girls race got out well and much faster than the open with several of the pre-race favorites already upfront in the first kilometer. By the first mile, which was negoiated in the mid 5:30s by Audrey Belf (Sr., Birmingham Seaholm), Anna Sophia Keller (So., Effingham St. Anthony, IL), and Rachel Bonner (Jr., Port Huron, MI). The trio stayed in tow for the next kilometer or so with Belf and Keller alternating with the lead. At 4k, Keller tried to make a break on Belf with her trademark side to side head jerking, but she was undeterred. Sarah Kettel, the junior from Capital Home school, seized the opportunity to compete against mainstream star runners moved to the front somewhere in the final kilometer. Kettel was a complete surprise to nearly everyone in attendance except for official race announcer David Mitchell who happens to be a fellow Michigander and high school running expert. He belted out, "here comes Kettel the home schooled runner from Michigan." Kettel inched away from Belf and Keller on the homestretch and won in 17:28. The favored and nationally ranked Belf settled for second in 17:30. She barely held off Keller who fought all the way to the finish line in 17:31. Bonner faded from the leaders but not far enough to give up fourth place and an automatic ticket to Portland ran 17:38. Dominique Clairmonte (Jr., Lexington), the Ohio state big school champion took the final qualifying spot in 17:39. Clairmonte's story was just as unique and satisfying as the rest of the girls in that her 2013 cross country season was derailed when she suffered a broken foot and could not finish the year. Needless to say Clairmonte was incredibly happy in the end.

Overall, it was a great day for most of the key runners and especially the Wolverine State who for many years could not compete because of state association rules. They took the first two spots along with three of the top five auto bids. It should be a fun time in Portland for all of the qualifiers, but especially the Midwest contingent who will be expected to rain on someone's party... or parade.