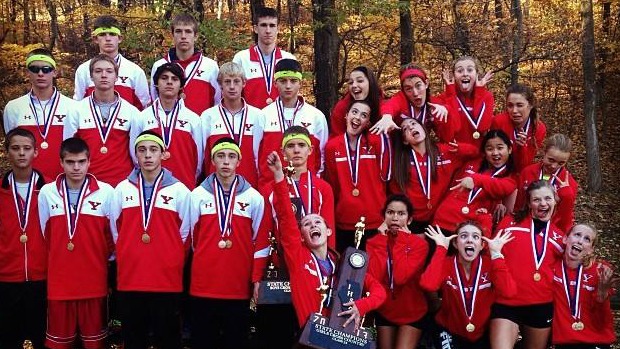 Whether it is in seriousness or straight fun and laughter, the Yorkville Fox crew will be favorites in the boys and girls races

‘Without a shadow of a doubt’… let’s repeat the set up again. Without a shadow of a doubt, this is going to be the race of the year classification wise prior to the state championship. Yes this is only one regular season invitational on the second weekend in September, but the implications moving forward after Saturday should tell a lot about the state of 2A cross country.

The top ranked Yorkville Lady Foxes will open the invitational portion of the season in the last place that they ended it- Detweiller Park in Peoria. In last year’s tilt, Yorkville made a complete mockery of the competition when they scored a scant 98 points. The runner-up finisher Glenbard South tallied a whopping 202 leggos. The Foxes potentially could be even more lethal with the return of nearly everyone from last year’s state championship roster. #1 runner and one of the state’s very best junior Skyler Bollinger. Bollinger bounced back strong during the spring 2014 track season after a fizzle like 2013 finishing harrier season. In her defense she was not 100% healthy down the stretch. Although it is still September, Bollinger and the Lady Foxes featuring sophomore Alexis Grandys, junior Julia Schultz, junior Becca Jasutis, and the return of junior Summer Pierson (missed the 2013 season with injury) should be great position to look like one of the elite teams in the state when the Sunday morning storylines arrive.

Is Dunlap overrated in the #2 ranking slot? Maybe so… but Lady Eagles early season resume looks great followed by a few dominos falling down in front of them propelled their move up the charts. In the team’s only major season meet, they crushed the competition at the Galesburg Silver Streak Invitational scoring a low 23 points. Dunlap put four girls in the first five finishers in that affair. The 1-2 attack of freshman Frannie Verville and veteran runner senior Abby Jockisch will need to shine even brighter in an extremely deep field at FTTF.

This meet will mean more to Normal University, Glenbard South, and Kaneland than it does say Yorkville. For starters, Normal U will finally see where they sit especially after losing top runner Sydney Billingsley to graduation. They do have junior Shannan Supan back in the fold. The all-state athlete will need to have that kind of performance for the Pioneers if they desire a serious run at a state trophy in November. Next up is the reigning state runner-ups Raiders. They have several question marks that need to be checked off before leaving Peoria. The main one is the team health and junior Diane Lipa. It is not known if she is ready to compete yet. If not, the team depth coupled by a stronger urgency of pack running will be called to arms. Lastly here is Kaneland. They are a team that could be dangerous at the end of the season if healthy. In the meantime, Brianna Bower (Jr.), Aislinn Ludwig (Sr.), and the return of 2012 state champion senior Victoria Clinton who have to carry the bulk of the load. Clinton is an established junior triathlete who had an outstanding season. Hopefully it will translate back to the grass course where she once ran a smoking 16:56.

One team that won’t be competing is #18 Highland and their all-state athlete junior Allison Zobrist. The Highland school district is in a strike and thus no fall sports until their matters are resolved. Danville, though, may be a team who could stand out and make a name for themselves on the big stage. Junior Elliott Mercedes led her team to victory at the recent Charleston Invitational. Marengo senior Kitty Allen could be the one to put some heat on Bollinger. Allen is a top runner who finished 13th in the state last year.

Individually, we all could see some very fast times on the speedway Detweiller track if the course was able to absorb some of the rain. “With the rain the course took in this week, it could actually make the spikes the runners wear more effective,” said one Detweiller observer. “The course is usually rock hard because of the hot weather in the area, and some rain on it will do it justice.” If this statement is true then expect the winner to go under 17:00. Bollinger ran 17:16 in July at the Detweiller at Dark meet under compete control and on summer training. If she is even a smidge better two months later, the fans are going to be in for a treat. Also, look out for The climes are also expected to cooperate all day Saturday.

Many questions will be addressed after this race is officially in the books. The key one will be ‘who is really the best boys team in 2A?’ Yorkville was stunned by then #2 Illiana Christian here last year despite going 1-2 on the strength of twins Jake and Luke Hoffert. The senior tandem could easily (actually expected to) go 1-2 again. But as every coach knows it takes five quality runners to equal a desired outcome. On paper Illiana looks more formable 1-5 than does Yorkville because of less loss of armor. The Vikings return 5 starters whereas the Foxes lost key runners Richard Skosberg and Nolan Tweedy to graduation.  Look for Nick Fiene (Sr.) and Colin DeYoung (Jr.) to neutralize the Hoffert twins effectiveness- by finishing high inside the top 10 on Saturday could do the trick. That means the battle for first will come down to the 3-5 players… may the best team win.

Vernon Hills is a team ready to bang with the crème of the crop. The Cougars have decided to split their team into half this weekend, of course the varsity getting to enjoy the spoils of the sport in Peoria. So far this season, things have been easy for Vernon Hills. The Cougars won the Sycamore Invite with ease followed placing second at the Fenton Early Bird Invitational against some great 3A schools. They should be able to compete with Yorkville and Illiana Christian if they can keep the scoring split around 1:10. Sophomore Shane Williamson and senior Tyler Smith will hold their own and lead the way.

Pre-season #8 Dunlap did not have a great day at the Galesburg Silver Streak Invite in finishing third. Hopefully, the Eagles are refreshed and ready to go this weekend. It is going to take a split under 1:00 to make the trip worthwhile. Senior Phillip Copeland is the main man for Dunlap.

Normal University High with seniors Alexander Bruno and Eli Hill are in it to win it. “Eli Hill and Alexander Bruno are both all-state track performers who should give us the best 1-2 punch we’ve had in a while,” said coach Lester Hampton of two aces back during the pre-season. The Pioneer scoring back is young and will get on the job training starting this Saturday.

Keep an eye on the upstart Alleman team. Although they lost star Zach Hird they are still potent with Jack Battaglia (Jr.) and Max Brunk (Sr.). They will lead a squad who likes a 45-second scoring spread. Metamora, Sterling, and the emerging Belvidere North team with Eryk Yunk (Jr.) should not be ignored.

On the individual side, this will be a fun race to watch of course with the Hoffert twins who went 1-2 last year running 14:31 and 14:39 respectively. They potentially could reach into the 14:20s together or run in the 14:40s. Either way it will be there’s to win or lose. Danville senior Caleb Hummer will try and pick up where his graduated teammate Johnny Leverenz left off. Hummer enjoyed a great track season in 3A that resulted in all-state honors with a 7th place finish in the 3200m. He has clocked 14:57 for 3-miles at Charleston. Fiene will be there as will the Bruno and Hill. Let’s also throw in Williamson, Yunk and Smith for depth purposes.