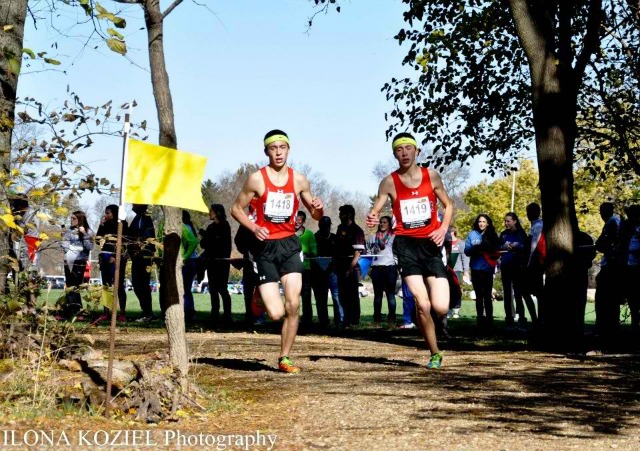 Pick your poison... the Hoffert twin combination is incredibly lethal no matter who you pick

Illinois has witnessed some great pair of twins over the years. It started with Todd and Mark McCalister of Deerfield in the late 1970s. They were monster runners for the 1977 team that smashed their way to a state title 71-134 over Elmhurst (York) and cementing their place in IHSA history as one of the best teams in state history as well as the US.

The gravy didn’t stop with the McCalister’s as perhaps the greatest duo in IHSA history toed the line from 1995 to 1998 in the Jorge and Eduardo “Ed” Torres twins of Wheeling. Jorge won three titles and Ed finished in the top 10 three times.

Don’t forget about Matt and Eric Dettman of York, they were instrumental in helping their team win the 2004 state title finishing second and third. The Dukes would go on to win the first Nike Team National title.

Now in present time Jake and Luke Hoffert, the serious and business-like twins of Yorkville, are ready to put a final stamp on their high school careers and legacy. After finishing third and fourth last season and then tearing up the 3A track ranks over the spring, BIG things if not incredible aspirations will be expected from this pair.

1. Jake Hoffert (Sr., Yorkville)- 3rd; The distance between first and second is probably the distance between Jake and his twin brother Luke bedroom- arm's length- very short. Jake was a 14:31 performer for three miles last year and certain to be much faster. If you take a look at track credentials of 4:11.71/9:10.81 it suggests he is ready for the next level of distance running, possibly a run at NXN or Footlocker. As one of the best distance runners in the entire state, the week to week journey along the way should be very fun to watch.

2. Luke Hoffert (Sr., Yorkville)- 4th; if Luke isn't winning races he will be glued to his twin brother Jake's hip all season long. There is no else better in 2A and only a handful of runners even on his level statewide. Luke has personal bests of 14:39/9:11.91/4:19.57. So in summary, foes are going to be having double vision all season long with Jake and Luke.

3. Caleb Hummer (Sr., Danville)- This kid emerged from the shadow of his now former team Johnny Leverenz when he won section 1 "the slow heat" state championship 3200m in 9:23.41 to snatch 7th place overall and earn all-state honors. The most compelling fact about his race was forcing the issue and putting the "championship" section in a situation where the field had to face the hot track and "race" an honest effort. On the grass Hummer has a personal best of 15:21 but no state meet appearances. That will change this November.

4. Nick Fiene (Sr., Lansing Illiana Christian)- 7th; as a member of one of the best teams in the classification, Fiene has played the team role rather than going for self. He ran the crucial third leg of his team's 4x800 relay that upset Maple Park (Kaneland) for the state championship. Now as a senior it is time for Nick to be a little more selfish and get the individual respect that he deserves. Don't be surprised to see him challenging the Hoffert twins or at least in the lead pack of the biggest races this fall.

5. Alex Keeble (Jr., Mahomet-Seymour)- DNR; on par to have a excellent post-season until he got real sick around regionals. Although he ran relatively well at sectionals, Keeble was not on his game physically leading up to state. He was able to warm up with his team before being pulled by his coach. Alex rebounded with a great track season early all-state honors in the 3200m and running 9:27. Most recently he clocked 15:05 at the Detweiller at Dark Invite and finishing 5th among high schoolers.

6. Eryk Yunk (Jr., Belvidere North)- 13th; the Yunk family tradition will continue this fall. Eryk will be a big player and stepping his game up more than ever.

7. Luke Beattie (Jr., Woodstock)- 21st; ahh another family legacy to uphold. From Elise to Kayla to Maura- all great siblings who made tremendous indents in IHSA history. Now Luke becomes the first male to make his way.  He should make a significant improvement from 15:21.

8. Matt Church (Sr., East Peoria)- 22nd; the leader of team that is destined to be heard from this season. Church ran 15:13 last year along with 4:26 for the mile and another all-state honor.

9. Shane Williamson (So., Vernon Hills)- 27th; Williamson has already clocked 15:18 on the Detweiller course in July. What does that mean moving forward? It could mean that he is very fit and should turn a lot of heads this season.

10. Phillip Copeland (Sr., Dunlap)- 128th; an interesting pick here. Copeland had a bad state xc meet last season and that is the bottom line. He was able to bounce back to run 9:37 and qualify for state. He will be much, much better this fall. Count on it!

11. Eli Hill (Sr., Normal University)- 98th; should be a strong force along with teammate Alexander Bruno this season. Hill earned all-state honors on the track in the 3200m. He will be among the best this fall.

12. Colin DeYoung (Jr., Lansing Illiana Christian)- 14th; DeYoung will be a great cog alongside his teammate Nick Fiene. That means he will be among the best runners in the classification again.

13. John Mangold (Sr., Metamora)- 28th; the jury is still out for Mangold because of his love for the 800m. He has three months to prove to himself and everyone else that he can move up the xc charts.

14.  Mark Myers (Jr., Lake Forest)- 24th; Myers ran well enough last season to stay on the radar this season. Watch for him to really step forward and become a top shelf runner this fall. Oh by the way he busted out a 9:24 3200m at the Palatine Sectional and qualified for 3A state.

15. Alexander Bruno (Sr., Normal University)- 44th; Coach Lester Hampton is convinced that Bruno is ready to step up and become an elite cross country runner. His 15:05 time from a year is a good starting point.

16. Lance Mueller (Sr., Waterloo)- 29th; an emerging talent who has gotten better each season. He stepped up during last spring with a 4:23 mile and just missed the state final by a spot. Sometimes tough luck outcomes are good for motivation.

17. Jack Aho (So., Grayslake Central)- 9:37 and 4:32 are solid times for any grade kid, but it is especially good for a freshman. That is what Aho ran last year on the track. His coaches believes he ready to take the leap in being one of the best runners in the state.

18. Heath Warren (Jr., Springfield)- 102nd; Warren was one of the state's top underclassmen middle-distance runners last season who happened to fall short when it came to three-miles. With a solid summer in which his coach stated that he ran a 15:09 time trial three-mile, Warren should be in good company this fall.

19. Clay Musial (Sr., Burlington Central)- 26th; Musial got the tough luck position of #26 and missing the final all-state slot. He will be super motivated to get on the podium this fall.

20. Brenner Webster (Sr., Salem)- 1A in '13; Webster made a big leap when with a solid track season dropping his mile time from the mid-4:40s to 4:25. That newfound confidence should translate to a big drop in his previous best of 16:03 for three miles.