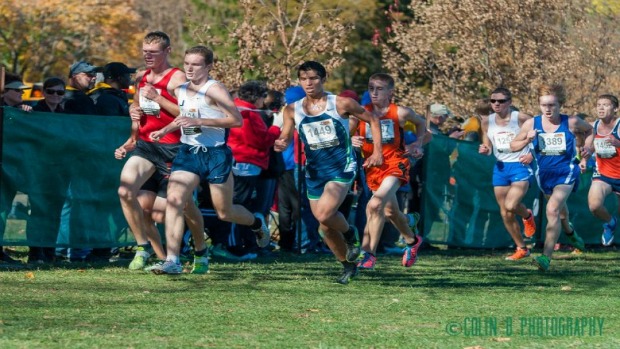 Being middle-class always come with changes. For this year more than any other time since the three-classification system was adopted in 2007 there has been more shuffling than in any time. For example, Chicago Jones moves to 3A because of enrollment changes as does Lisle (Benet Academy). Initially Hinsdale South was slated for 3A but an oversight by the IHSA will keep in 2A for at least another season. Chicago Latin, a tiny private school, makes the jump from 1A. They earned a trophy on the girls side last year.

18. Maple Park (Kaneland)
Head Coach: Chad Clarey
Last year’s finish: State- 22nd
Key returners: Brandon Park (Sr.), Andrew Lesak (Sr.)- 87th, Sean Spaetzel (Jr.)- 111th
Newcomers: Austin Kintz (Jr.), Tanner Robertsen (Jr.), Zach Kurz (Jr.), Brandon Cruz (Jr.), Austin Parks (Jr.), Jared Murri (Sr.)- transfer from Keller Timber Lake, TX. 60% of our roster is brand new to the sport or coming up from our junior high program. Additional seniors who have made a huge impact with their leadership this season include James Walker and Mitchell Reger, both working on keeping Top 7 roster spots. Junior Will Kuipers has also been showing signs that he is interested in having a Top 7 slot.
Coach Cleary’s Take: This year we do not bring back many experienced runners [despite inheriting three of last year’s top seven from state], therefore our learning curve will be steep in the first month or so of the season. However, the large roster of 36 runners bodes well for the future with a heavy population of juniors who will work to learn the sport this year, and make a big impact in 2015.

16. Darien (Hinsdale South)
Head Coach: Jim Dickerson
Last year’s finish: 7th- Wheaton Academy Sectional
Key returners: Vicente Perez (Sr.), Charlie Nodus (Jr.), Roman Drabchuk (Jr.), Joe Eilbert (Sr.)
Projected top 7: Perez, Nodus, Drabchuk, Eibert, Chris Joseph (So.), Matt Daniel (Sr.), ???
Newcomers: Tristan Ramirez (Jr.), JR Rickert (Fr.), Trevor Schauer (Fr.), Will Hogan (Fr.)
Coach Dickerson’s Take: We return our top four from Sectionals last year. 3 (Nodus, Drabchuk, and Eilbert) should be significantly improved after good track seasons and summers. Vicente, unfortunately, has had knee problems and has not trained much since winter. Hopefully he returns to where he was last season. He was our #1 last year but I would be happy if he is healthy enough to be our #4. Chris and Matt had great summers and Tristan is a good addition after transferring from Glenbard West. We have 4 or 5 other talented runners who could be in top 7. Some had good summers, some didn't. The first week of practice went really well. If the top 3 do as well as I think they can, Vicente returns to form, and our 5th is not way back we will be vastly improved and could be very good. But we don't have much experience running at a high level and being an excellent cross country team will be a new experience for all of them, so we might have some bumps.

Our goals are to challenge the top teams in our conference (DGS and Morton) and to qualify for State. Our state goals are not too concrete, but just to run well when we get there. I feel like Charlie Nodus, who ran 9:54 and 4:32 last spring and had a great summer, can at least be in the low 15s, and Roman is not too far behind. He did a 16:11 time trial on the track pretty much by himself in early July. Joe Eilbert improved all through track and ran 10:16, and also had a great summer and historically has been better in cc than track. He should be sub-16. We have several other guys who could bring the 1-5 split to a respectable level. Even it is 90 seconds we could potentially qualify and do pretty well. If Vicente is reasonably healthy, that helps a lot.

15. Crystal Lake (Central)
Head Coach: Bill Eschman
Last year’s finish: State- 7th place
Key returners: Cole Barkocy (So.)- 91st, Jacob Cannizzo (Sr.)- 72nd
Projected top 7: Barkocy, Cannizzo, Westin Sterchi (So.), Ryan Bush (Sr.); after that the door is wide open.
Newcomers: Steven Hillier, Ryan Hillier, Ben Swanson, Tyler Tomasello, Brandon Tomasello
Coach Eschman's Take: The summer training went well.  We are in a rebuilding year as we lost our top four runners to graduation and our #6 runner did not come out.  This has left the door wide open for the younger guys to see what they can do. It will be a growing year and we will struggle at times. We do have two seniors (Ryan Bush and Jacob Cannizzo) that will help keep the guys running hard and positive.  Also Cole Barkocy will only improve this year and be a tremendous plus for us. As always I expect each runner to work the best they can and give 100% and to do what they can to help the team be the best it can be.  Our conference division will be tough with Prairie Ridge and Grayslake Central. They are 2 teams that are improving dramatically.  As always the Kaneland (Old Belvidere) sectional will be tough.  Every year it has 3 or 4 of the top 10 teams in the state and I don't see that changing much.  It would be nice if the state did regional/sectionals as a ranking, but until then it is what it is.
Tony’s Take: Crystal Lake Central has a strong history in the cross country department including beating a dominant York team back in 1995 that ended the Dukes six-time state championship streak. Certainly the Tigers are not in that class, but they have a way of performing on the big stage when others have counted them out.

14. East Peoria
Head Coach: Brandon Shaver
Last year’s finish: State- 23rd
Key returners: Matt Church (Sr.)- 15th, Michael Church (So.)- 96th, Cody Giebelhausen (Sr.)- 119th, Jimmy Kaufman (Sr.)- 142nd, Patrick Schwinn (Sr.)- 187th
Projected top 7: Church, Church, Giebelhausen, Kaufman, Schwinn, Nick Spokely (Jr.), N/A
Newcomers: N/A
Tony’s Take: The Raiders should be a much improved team from a year ago on the stretch of the Church tandem. The brother duo will be the glue in bridging a squad that returns a boatload of returners including six of the top seven state meet performers. Matt Church placed 22nd last year in Peoria and drop 9:46/4:26 times on the track. He should be a big player this season. Little brother Michael was an above average freshman who clocked 4:37 and 10:04. The ultimate key as always is improving the 1-5 scoring split.

13. Rock Island (Alleman)
Head Coach: Doug Burke
Last year’s finish: State- 13th
Key returners: Kienan Otto (Sr.)- 75th, Augie Darrow (So.)- 118th, Aaron Golding (Jr.)- 121st, Welsey Graham (Sr.)
Projected top 7: Otto, Darrow, Golding, Graham, others
Newcomers: N/A
Tony’s Take: The face of the program Zach Hird has graduated but he leaves behind four veteran starters led by Otto who had a decent track season. The key element in getting the quartet to remain status quo is keeping the scoring split low. That task should not be as difficult as it looks on paper with the 3-mile range being 15:51-16:30.

12. Grayslake Central
Head Coach/coach: Jimmy Centella
Last year’s finish: 17th- State Meet, tie 5th Belvidere Sectional, 1st Woodsock North Regional.
Key returners: Jack Battaglia (Jr.)- 53rd, Max Brunk (Sr.)- 77th, Suneed Ahmed (Sr.)- 132nd, Danny Vincent (Jr.)- 145th, Noah Boelens (So.), John Girmscheid (Jr.), Eli Straus (Jr.), Kevin Ocsena (Sr.), Aaron Johnson (Sr.)
Projected top 7: Aho and Brunk will likely be our 1-2 punch. Then Battaglia, Vincent, Ahmed, Girmscheid, Minsky, Boelens plus a few others like Straus, Johnson, and Ocsena will be battling it out for the rest of the top 7.
Newcomers: Jack Aho sophomore-Did not run XC last fall but had a breakout freshman track season running a 4:32 1600 and 9:37 3200. Eli Minsky freshman-ran a 4:45 1600 at IESA state meet as an 8th grader.
Coach Centella’s Take: This has been one of best summers of training since I started coaching. We've had years where some guys maybe ran more miles or trained faster, but as a whole, the group this summer was the deepest we have had running the miles and paces of what we want our top group to be doing. We hope to make our third trip in four years to Detweiller and improve upon our 17th place finish from last year. Also Aho is poised to turn some heads this fall. Hopefully he can be the next Grayslake Central runner to take home a state medal. Brunk is another runner to watch for. He is a veteran senior leader that continues to improve each season. If we can stay healthy this fall and come to practice each day wanting to get better, then I think we will have a great chance to achieve or even surpass our goals.

11. Springfield
Head Coach/coach: Dan Devlin/Trae Cotner
Last year’s finish: State- 9th
Key returners: Heath Warren (Jr.)- 77th, Logan Besalke (Jr.)- 56th, Eric Wise (Sr.)- 82nd, Michael Neposchlan (Sr.)- 70th, Evan Northrup (Jr.)
Projected top 7: Warren, Besalke, Wise, Neposchlan, others
Newcomers: N/A
Tony’s Take: Warren has had a great summer according to the coaching staff.  In mid July he ran 4:24 for the full mile on the track after an 8 mile morning run at a local race that was put on by their road runners club called the "Sizzling Mile."  He also ran 15:11 for the team’s end of the summer camp time trial.  Besalke, Wise and Neposchlan have had great summers as well.  This team will be looking for a 5th runner, but have plenty to chose from. It just depends on who steps up.