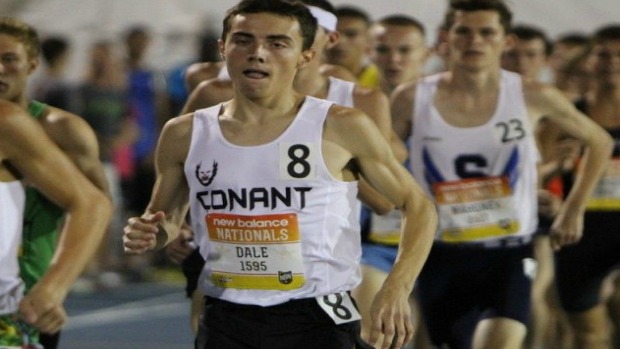 Dale sized up the competition in the 5k and stretched them out for 3rd place (Milesplit.com photo)

It was real cool to see the vibe upon entering the North Carolina A&T University's Aggie Stadium in Greensboro, North Carolina.  New Balance had it all laid out for the athletes like a small child in a candy store with apparel, photo booths, interactive communication, live disc jockey playing music, and of course good action from the track and on the field.

The track side as it was said produced some very good results on what is termed “emerging elite” day. Of course there were some regular events thrown in the fray. Along the way the action came to an almost halt. In other words, the meet schedule got tangled up and things got behind nearly an hour. It was hard to explain what exactly happened. Hopefully it was just a hiccup with meet management who had to deal with an overflow of entrants. 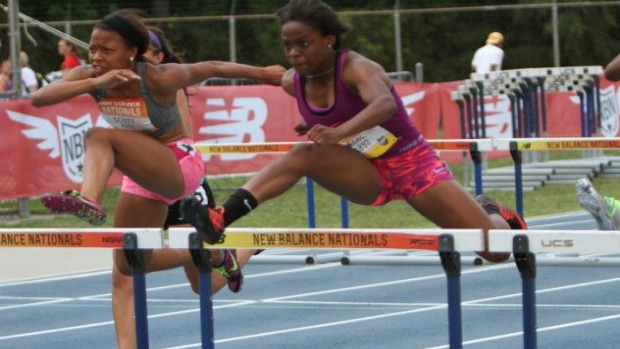 Maya Neal is on the verge of another All-American honor in the Heptathlon (Milesplit.com photo)

Maya Neal (Jr., Naperville Neuqua Valley) sits in sixth place after the first day in the women’s Heptathlon. Neal started the day off in fine fashion with a near personal best in the 100H by rocking the track in 14.67. The season time was just a shade off of Neal's personal record 14.62.

“I feel alright but I can do better,” said Neal after completing the 200m. “In the last race I ran her race in that I was tightening up,” Neal referred to Brittany Kelly of Clarksville, TN chasing her down in the final meters to pull the win 25.24-25.31.


•    Alexis Pierre-Antoine (So., Frankfort Lincoln-Way East) recovery bid for 2015 started out a bit sluggish when placed fifth in heat 1 of the Girls100H running 15.28.

•    Mary Blankemeier (Fr., Oak Park-River Forest) had the race of her life in the mile last week in St. Louis at the Festival of Miles when she won the developmental mile in 4:55.58. Perhaps, the weary road travel got the best of her as she placed 10th in the freshman girls’ mile 5:02.01.

•    Boys 5000m: For the first time in meet history the fans were invited to come down the stands and line the track to support and cheer on the runners. In a scene that was surreal, Zach Dale (Jr., Hoffman Estates Conant) ran the race of his track life to date finishing third in 14.29.95. Dale got himself into a great position up with eventual winner Alex Ostberg (Jr.; Darien CT)- 14:16, Paul Hogan (Sr.; Burlington MA), and Elijah Armstrong (Jr.; Pocatello ID). Dale bid his time well by mixing in a steady diet of 71 and 72 second 440y circuits. He finally unloaded a final lap of 68.xx that sealed the deal on a near perfect race. Dale will be a man on the national radar this fall in cross country and on the track in 2015.