The 46th Annual Prospect Wanner Knights Invitational entered the track world scene with tremendous hype amid the pending so-so weather forecasts. Mother Nature promised all of the faithful who trekked to Prospect High School in Mt. Prospect Friday evening that she would do her best in presenting decent climes.  If she kept her word the boys of spring would take over and do their best to not disappoint the track and field aficionados. 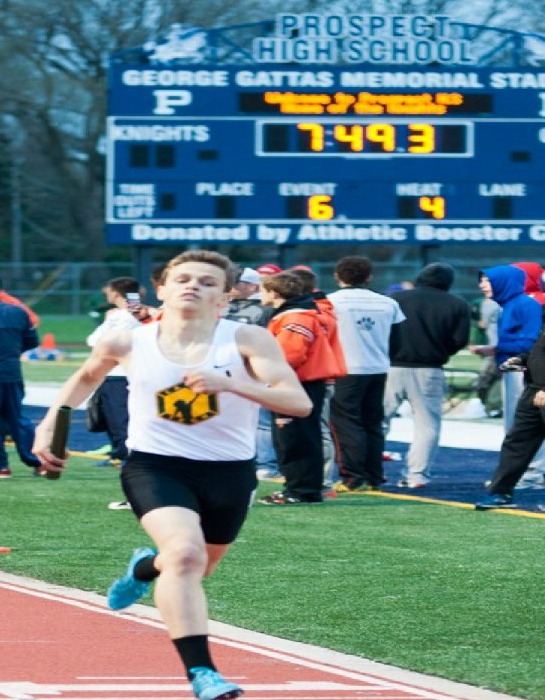 Like many great 4x800m relays teams that have come before the Chicago Public League Lane Tech, the foursome of David Schmieg (Sr.), Jon Vara (Sr.), Christian Badillo (Jr.), and Pavlo Hutsalyuk (Jr.) targeted the Wanner Prospect race to unveil their “A” for the first time of the season. Everything that transpired beforehand including the indoor season did not matter. Still, that did not prevent meet announcer Bill Treece from proclaiming Lane Tech as the favorite. “The Indians are the favorite here,” he would say loudly over the airways.

Leading up to the meet, the quartet had an opportunity to do some maintenance and self check of what was right and wrong. They also kept an eye on the competition around the state such as New Trier, Kaneland, and several other units dropping their times under 8:00. The goal for Prospect was to win the race and if they did so the fast time would be there. This is how good the Wanner meet is. After all it produced the meet record and then national record standard of 7:34.1 back in 2000.

The lead off assignment was given to Schmieg. He hasn’t had many opportunities to run a true 800m and the lead role is about as close to running an open half-mile as there is.

Schmieg would execute his plan to his liking by immediately applying pressure on the field with 27 and 56.4 opening splits. Who ever felt comfortable then had to immediately alter their plans. As Schmieg continued to stride way Lyons Township’s Ed McCarter (Sr.) made his move at the 500m to leave the nest along with Fremd. The opening leg was 1:54.9 for Schmieg. Fremd’s guy followed up with a 1:57.7 and Lyons at 1:57.8. A slew of others including Hinsdale Central, Prospect, and Hersey were under 2:00.

Vara continued Lane’s madmen quest of trying to run away with the race by getting out fast for the first 150m before settling down and running controlled as he hit the opening lap in 57.5.  The pack of Lyons, Fremd, Hinsdale Central, and Prospect remained three seconds back. Hersey lurked a few strides behind them. On the final home straight the pack led by Fremd and Lyons chopped off about a second. Vara had completed his mission of holding on to the lead with a 1:59.9 carry.

The most important leg of the 4x8 relay is the third leg because this is where many teams deploy their bosses. Lane on the other hand tried to hide their Achilles Heel. Badillo’s only task is to run well enough for the anchor to be in position to strike a victory.

Badillo took off well but the adrenaline that he had caused him to go out too fast for the first 200 in 26 seconds. He had committed much too soon and would cause him to pay for it with 150m to go. Hersey’s David Rodriguez roared from fifth to first to run an outstanding 1:55 leg. Badillo had faded bad and fell to second.

Hersey anchor Kevin Kovach (Sr.) used the momentum right away moved out followed by Hutsalyuk and Lyon’s Alex Lima (Jr.). At this point it was a three man race- wide open. Hutsalyuk used his first instinct to go after Kovach rather than wait until the gun lap. Hutsalyuk chased down Kovach and caught him in the opening 250m and sped past him.  With one lap remaining Hutsalyuk continued his assault by pulling away from the field. As well Lima passed a tiring Kovach with less than 100m remaining. The final margin was Lane Tech rocking a state leading 7:49.57. Hutsalyuk split 1:53.4 to aid his team’s cause. Lima was impressive his run as well hitting his leg in 1:55.6.  The Lyons ran a good season best of 7:52.56. Hersey look good overall with bronze medals in 7:53.72. The ever lurking Prospect produced a season best 7:57.36. Hindale Central and Fremd were at-large teams who didn’t count in the team scoring but ran 7:58.15 and 8:01.01 respectively. Defending state champion Barrington without ace Konrad Eirling (Jr.) clocked 8:02.55.  Times were much faster than last year which had good weather. In that affair York ran 7:57 to win the title.

The second order of the day was Schaumburg and their fearless foursome getting set for the 4x1 relay.  The talk coming in was about the 41.82 they ran several weeks ago at the beginning of the outdoor season. The question that everyone wanted to know “is this team for real?”  The 50 degree weather followed by drizzle and swirling winds is not a recipe for good sprint times. Nevertheless the unknown was about to unfold…

The race got off to a clean start as the field appeared fast and even on the first legs. But after the dust settled it was clear that this was a race between York and Schaumburg. Both teams broke stagger on the backstretch with York holding a slight advantage. Billy Poole-Harris was doing a marvelous job in hyping the crowd as the race hit the final curve and toward the anchor legs.  The Dukes of York continued to hold a slight lead until Schaumburg’s Shandall Thomas grabbed the stick and powered past his counterpart with ease.  The final verdict was a no doubter and new state best in a sizzling 41.52.  York did not exactly bow down as they produced a season best and IL#2 41.86. It is now evident that the Saxons are the hunted and they will be tough if not impossible to capture as the post-season is on the horizon.

The second race of the day was the 4x2. Once again Schaumburg came in with a state best 1:28.04. In fact, each time the Saxons laced up the spikes they have hit in the 1:28s.

It was another clean start all the way around the track for the eight teams. The Prospect stadium lights coupled by Schaumburg’s black uniforms made it a little difficult to determine exactly what position they were in. It wasn’t until the homestretch that the race unfolded for the Saxons and the Dukes who once again were locked into a tight battle and clear of the field.

Schaumburg began to open up during their second trip on the backstretch and subsequently put the race out of reach on the strength of Thomas’ strong anchor carry. It only took a few moments for the public address announcer to mention another meet record was smashed by the Saxons. Schaumburg produced the 20th fastest time in the country with their 1:26.60 in very sub-optimal conditions. York ran well again in the runner-up spot rocking 1:27.92. Just wait until Mother Nature really cooperates. 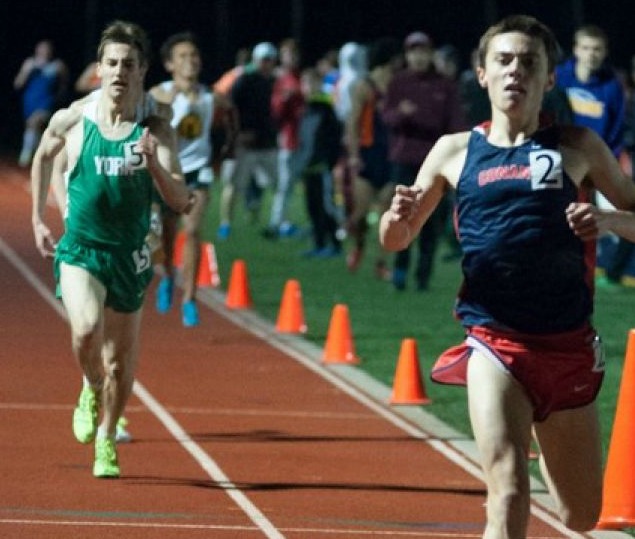 The formable Zach Dale (Jr., Hoffman Estates Conant) came to Prospect on a mission. As one of the top distance runners in the state and premier stallion in the mighty Mid-Suburban League, he knows plenty about competing against some of his league rivals. Dale was initially scheduled to run the 3200m but after consulting with his coaches, they it was best for him to put down a great mark in the 1600m. “I discussed with my coach about the [1600] because I went to Arcadia [Invitational in California] for the fast two-mile,” Dale said regarding his change. “I really needed a mile PR- I haven’t broken 4:20 since last year. I think this is the best choice for that.”

The at-large entrant Dale made the most of his opportunity in the 1600m. The pace of the race went out fast and honest in 61.4. Dale controlled matters through the next circuit in 2:06.  The chasers consisted of Alex Bashqawi (Sr., York), Chris Korabik (Sr., St. Ignatius), and David Schmieg.  All four runners rotated the track within an arm’s length of one another until the bell at 3:09.  Dale put his foot on the accelerator and cruised home in a state leading 4:12.09 for 1600m (Danville's Johnny Leverenz ran 4:12 for the full mile). Bashqawi who is fresh and well from the illness that wrecked his cross country post-season posted a personal best 4:13.61. Korabik earned a personal record by holding on to the third position in 4:14.24. Schmieg also recorded a lifetime best of 4:16.24.

-Michael Jopes (Sr., Naperville Central) said he was influenced by last year's Wanner Knights hurdle king Dave Kendziera from Prospect (now running for the University of Illinois). Mr. Jopes went out and duplicated his feats by sweeping both events: 110HH (14.74) and 300H (39.22).

-Shandall Thomas won the 100m in a personal best 10.69. It was hard to tell if his effort would have been wind-aided because of the swirling winds. By the way he ran his legs on the record setting 4x1 and 4x2 relays. Thomas now has to be given credit for being a legit 100m man.

-Schaumburg did well in the field too sweeping the jumps. Stacey Smith (Sr.) won the long jump in an outdoor season best 22-3.5; Eddie Kelly (Sr.) took the triple jump in 46-1 and his teammate Smith was second with a solid 44-7.75.

-York won the team title on the strength of an all-round good effort scoring 154 points to Schaumburg's 114.5. The Dukes got two wins in the field events from senior Reid Smith. Smith won the pole vault (13-3) and then recorded a personal best in the high jump (6-8.25). Josh Farrar (Sr.) took third in the 200m by clocking 22.22. Farrar had previously earned second place in the 100m with a time of 10.92; Matt Plowman (Jr.) won the 800m in a personal best 1:54.27. It appears as though Plowman will have an event that he can look forward to in the state series if his mates don't start producing in the 4x8. Jarvis Hill (Sr.) racked up two second place finishes in the hurdles for his team.