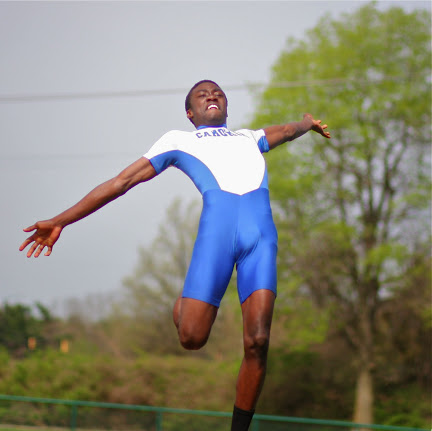 It seems like I always lead my column off with a comment regarding the weather. Well guess what? I’m going to do it again. It has been a solid spring so far compared to last year and the climes have been more than adequate for the coaches who stand and coach in the elements. Well don’t let me jinx things…

The outdoor season is full bloom as times are dropping like flies now. The trend started several weeks ago when the temperatures were in the upper 70s in the Chicagoland to lower 80s down in the southern section of the state. Even though it was a bit windy throughout the metropolitan area and elsewhere it the trend of fast action has continued.

This past week in particular we saw a number of positive things in track and field on the boys side. Edwardsville took the plunge and headed east to Philadelphia to compete in the world famous Penn Relays.  The Tigers were invited to compete in the 4x100 and 4x400 relays. Head Coach Chad Lakatos’ crew made history as the first Illinois male quartet to earn medals with a fourth place finish in the 4x1 clocking a solid 42.54. Edwardsville should have all the confidence that a group of teenagers could ask for as they will soon enter back into fierce state competition. After running against some of the nation’s best sprinters as well as the potent Jamaicans, watch for a new swagger on the faces of the Tigers. 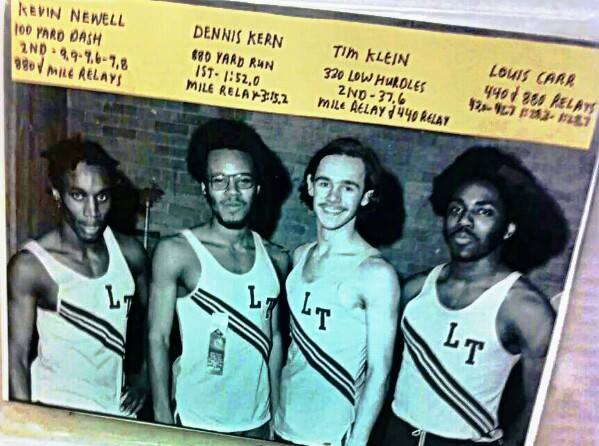 A blast from the past visits-

This past weekend was a special one for although I missed out in meeting all the members of Lane Tech’s 1974 state track and field championship team. I remind my team all the time how fortunate they are in having something to shoot for.  They are well aware of the “old school guys” running track meets in the hallways because of the lack of indoor facilities in Chicago and the state back then. They also know about cinder tracks from the war stories the coaching staff and anyone who competed in the 1970s and 80s. We now have a track that is fully surfaced as is the football has turf.

Another busy week lurks ahead-

This upcoming week and weekend is going to be another action packed set of days beginning Wednesday evening at York High School in the nearby western Chicago suburb of Elmhurst. York coach Jim Hedman came up with a brilliant idea to put on a Distance Medley Relay. Dyestat Illinois has jumped in to sponsor the 13-team affair. It should be a friendly but fierce competition for all involved. Coach Hedman called me several weeks and left a message on my voicemail, “hey Tony give me as soon as you can.” As a true old school cat, he did not leave any further details. The first thought in my mind was ‘what did I do.’ I know that I have ruffled a few feathers in my Spikes and Flats segments.  But like a true ‘G’ I called him back. We would play phone tag for almost three days before finally touching base with one another.

Hedman said that he wanted to get his team a qualifying mark for the New Balance Outdoor Nationals DMR. He knew that we were interested in going to North Carolina in June as well as several other state teams. The entry guideline into the meet calls for a seed time of 10:15 and getting in is rare- especially for Illinois teams who have limited opportunities. I told coach Hedman that were interested although we planned to run the event at the Hinsdale Relays. When we did not hit the time I told him to include us in.  Coach Hedman was able to secure great teams such as Jones College Prep, Hinsdale Central, Neuqua Valley, Kaneland, New Trier, Downers Grove South, and Yorkville.  This race is something my guys are taking very seriously on the eve of the Prospect Wanner Invite. We know that we must come with our A+ effort.  It is also time to show national meet coordinator Joe Lanzalotto and the rest of the nation that Illinois can compete in this event.

A few items that made me go hmmm-

Part of my occupation among coaching and mentoring is running a website. Being an editor is a full-time job that many people in my inner circle can attest to. That requires long hours sifting through results and making personal assessments of what is considered note worthy. However, that doesn’t mean that what isn’t captured and put into print is not note worthy if that makes sense. Let’s take a stab at some of the in state action that caught my eye:

• Kyrin Tucker (Sr., Normal West) popped a state best 183-1 discus throw toss at the Springfield Lanphier Invite. Tucker is an imposing figure with a very gentle voice. The imposing figure obviously comes out when he is in battle mode.

• The Winston Brown Invitational was absolutely on fire with crazy marks and times despite no “A” team Edwardsville in attendance. Ja’Mari Ward, the super sophomore from Cahokia, is 100% healed from injury and being shell-shocked at the New Balance Indoor Nationals. Ward took out weeks of frustration on the triple jump and long jump competitors with wind legal 50-6.5 (+0.9) and 24-5.5 (+1.8) marks. If you like consistency then you will appreciate that the US#1 legal jumping Ward also leaped 48-3 and 47-10 which are the state’s top three jumps. Mr. Ward also jumped 24-2 in a prior long jump attempt.

-The Sue Pariseau Invite usually is the girls invite to watch on this weekend but without Glenbard West senior superstar Maddie Perez it wasn’t as hot.  So that honor went to the Lake Park Carol Koszola Classic:

-Eric Baron, the fine coach at Maple Park (Kaneland), asked me about the possibility of taking his team to the New Balance Outdoor Nationals several months ago. If you recall, his bunch won the 4x800m relay 2A state championship last year. The Knights return three guys who aim to blaze even faster. They went out and proved it last weekend at the Kaneland Peterson Prep Invitational with a lightening quick time of 7:50.27. The splits went as follow: Andrew Lesak 1:59.1 Luis Acosta 1:59.5 Kyle Carter 1:57.6 Nathaniel Kucera 1:53.8.

• Let’s talk about this super freshman Matt Pereira of Lake Zurich for a second. Not a lot has been mentioned about Pereira although he had a wonderful cross country season that netted him a 69th place in the 3A state meet. What has caught the eye was the amazing 4:17.50 clocking for 1600m at the Warren Invite. Pereira recently ran 9:18.19 at his own invite last weekend. It seems as though Pereira will have the hunted target on his back for the remainder of this season.

• Mariya Hudson is a name that popped up back in January when I was doing some research for girls track and field previews. I made a call to Cahokia boys coach Leroy Millsap to acquire some info. He immediately said: “she is a freshman who competed for me during the summer. Man, she is going to be a good one.” Coach Millsap was more than correct in his comments as Hudson has quietly burst out on the high school scene with 24.33, 55.63, and 17-9.5 marks. She may be able to challenge the likes of Ebony McClendon (Sr., Chicago Brooks) and Ryan Preacely (Sr., Johnson College Prep) at the state championship.