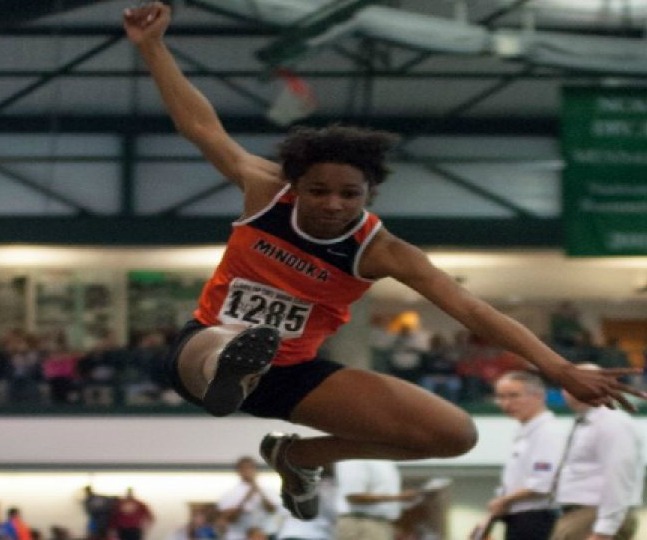 The meaning of the word depth is characterized as the quality of being deep.  There is not much to it as you can see until you look into the Illinois Top Times meet program and realize how many big names and teams that opted out of competing in this grand meet.  The truth of the matter is when you are one of the biggest states such as Illinois depth will rear its head.

Depth can also mean stepping up in the absence of others.  This fact was very true inside the massive but cozy Shirk Field House on the campus of Illinois Wesleyan University in Normal-Bloomington. With the absence of Oak Park-River Forest and East St. Louis Boys teams meant there was the presence of Harvey Thornton who entered the fray for the first time under head coach Vince McAuliffe.  His Wildcat crew made a memorable impression on the competition as the indoor campaign fades out.

How about Lincoln-Way East and Evanston girls either in Texas or hibernating until mid-April? Well that means speedsters from Homewood-Flossmoor and St. Charles East get to sharpen their blades for the stretch run of May.  It also means that competitors like Briyahna Desrosiers (Sr., Chicago North Lawndale and Cole Henderson (Sr., Pekin) get to repair reps in time for rematches in the post-season.

The transition between the 2A and 3A competition is always an interesting sight to watch. The final track events are in the process of finishing up and the 3A field event kids are going through their final warm-ups and run-throughs. The head meet announcer Matt Pieschinski is at a fever pitch in bringing excitement to the masses.  As well the 3A crowd has gathered in their familiar places on the upper level seating and along the track side.  This is indoor track and field at its best. Let the action begin!

Who could have predicted that a senior from Minooka named Janile Rogers would do something as amazing as set the all-time long jump record of 19’10.75”? The 3A crowd was barely in their seats when this young lady touched the board for the springy leap on her fourth attempt. “I knew when I hit the board that it was a far jump because I had more speed and more height than usual, “said Rogers with a glowing smile at the conclusion of the 3A competition. The day did not start well for Rogers though as she fouled on her first two attempts.  On her third jump she got a mark of 19’7.5”.  That was the set up for the next record jump. Emma Spagnola (Sr., West Aurora) kept her honest with her 19’2.75.  Now the next milestone would have to be something an Illinois school girl hasn’t thought of in a very long time: Alexandria “Alex the Great” Anderson. “Do you think I can get… like 20-feet, 8-inches?” Rogers certainly has done some studying of her predecessors and what it takes to get to Mount Olympus. It’s going to be a fun ride for Rogers and Minooka during the outdoor season.