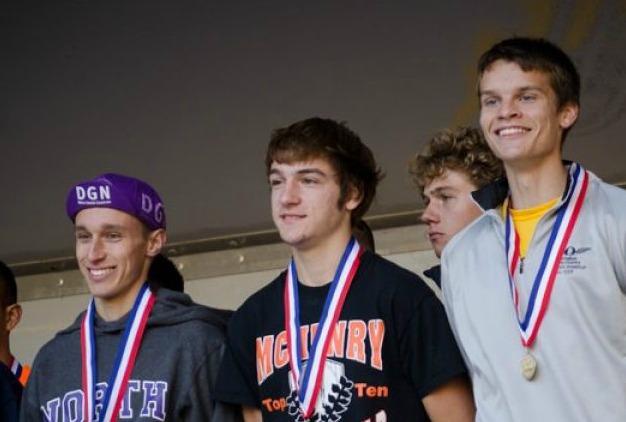 The Big Three: Zack Smith, Jesse Reiser, and Patrick Perrier will be the Illinois distance gods in 2014

Despite a harsh winter that has put the kabash on quality training outside, the distance arena will still be the crème de la crème in Illinois track and field land.  Aside from the Big Three of Zack Smith, Jesse Reiser, and Patrick Perrier, the deck of cards have changed and new leaders will emerge from last season to cross country and finally through the winter training prologue.  The three events: 3200, 800, 1600 should exhibit some very stout performances throughout the year.  So, it would be wise to keep an eye on the form charts from the indoor season to outdoor as they will change a bit.

The state of Illinois has lost an incredible warrior in Jack Keelan (Chicago St. Ignatius).  He showed his peers, fans, and coaches how to face incredible adversity in his junior year of cross country when he did not make the state meet despite being ticketed as an easy all-state candidate. Keelan wore the bullseye on his chest a year later with pride throughout the entire season. Now let the torch that has been passed to Patrick Perrier (Sr., O’Fallon) and Jesse Reiser (Jr., McHenry) burn bright for all in the premier category in all of Illinois high school track and field!

Patrick Perrier started off the 2013-14 school year as Illinois’ premier distance runner in many folks eyes.  He won the state cross country title and went undefeated during the school season; he lived up to most of the hype set by the media in making the Footlocker Cross Country Championship. But he did not separate himself from one young man.  That aspiring guy was Jesse Reiser. Reiser finished second in the state and closed the gap on Perrier with national qualifying berths in the Nike Cross Nationals and Footlocker. For a national caliber athlete, it means more to garner points beyond the state meet. Of course, you must win in your own back yard first to build the right to say you are the best.  But at the end of the day, there is no true favorite going into this track season.  Unless someone didn’t train as hard or gotten fat or injured in the lows of the winter.

If Perrier and Reiser are to be 1-2 and ahead of the field, then Zack Smith and Nathan Mroz have to be 3-4.  This state could potentially see at least four guys running under 9:00 before the season is in the books. Let’s add Dan Lathrop in this discussion as well as Zach Dale and Nolan McKenna.  McKenna did not have the blow out cross country season as some had expected, but he is a beast on the track and will be ready to improve on the 9:03 he produced in Charleston.

Ahh, the fans are going to be spoiled so much this spring by great distance running! 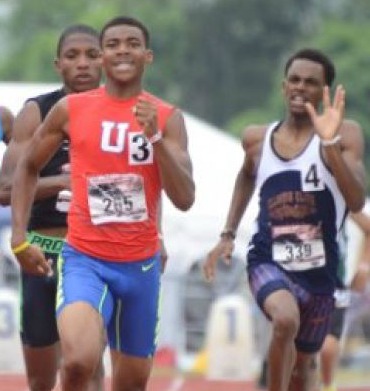 Matt Anyiwo (in dark uniform on the right) returns with the classification's top mark of 1:52.03

800m-
2013 State Champion: Johnny Leverenz (Sr., Danville) 1:53.28
Key returners: Leverenz, Bryce Richards (Jr., Mundelein), Kevin Grahovec (Sr., Aurora Marmion Academy), Jack Peters (Sr., Lombard Glenbard East), Matt Anyiwo (Sr., Homewood-Flossmoor), Kyle Hatton (Fox Lake Grant), Carl Klamm (Jr., Evanston), Patrick Perrier (Sr., O’Fallon), Ty Moss (Jr., Naperville Neuqua Valley), Pavlo Hutsalyuk (Jr., Chicago Lane Tech).
Outlook: This year will be a contrast verses last year when the entire state field was gutted due to graduation.  There are at least five candidates capable of going under 1:52 this year and one or two pushing the 1:50 barrier.  Johnny Leverenz is the defending state champion who won in soggy conditions. He is one of those pics capable of running sub 1:51. Matt Anyiwo had a breakout summer that actually produced the top running time of 1:52.03 at the World Youth Trials.  Anyiwo also has tremendous leg speed to go with solid endurance.  He clocked 49.5 for the 400m and has run 15:22 for three-miles and competing in the state cross country meet.  Patrick Perrier will probably pass on the half-mile in championship time, but he has run fast enough to be a contender in the event if he chose to. So it appears as though the half-mile will be as competitive as any event on the docket.


1600m-
2013 State Champion: Jack Keelan (Chicago St. Ignatius) 4:12.11
Key returners: Zack Smith (Sr., Downers Grove North), Patrick Perrier (Sr., O’Fallon), Nolan McKenna (Sr., Wheaton-Warrenville South), Zach Dale (Jr., Hoffman Estates Conant), Peter Cotsirilos (Sr., Winnetka New Trier), Graham Brown (Jr., Palatine), Jesse Reiser (Jr., McHenry), Nathan Mroz (Sr., Elmhurst York), Harry Winter (Sr., Palatine Fremd).
Outlook: Don’t be fooled by the heavy graduation rate of a year ago, this event is going to be strong as it always seem to reload with up and coming talent.  Plus, the few guys returning from the state meet are no slouches. Patrick Perrier ran 4:12.66 last year and is expected to go under 4:10 before the state championship. Zack Smith emerged well last winter and through the spring when he earned all-state honors.  Everyone knows that he is much better than 4:13 he ran last April. Smith could be the state favorite if Perrier concentrates on the deuce.

There are a few other notables that will show big improvements as the season moves along. Nathan Mroz enjoyed a healthy cross country season and he will be among the best in the field whether or not he decides to run here as a primary event.  Many fans will want to see the vast improvements that Jesse Reiser has made in his leg speed. He ran 4:19 last year in albeit limited action.  There is a general consensus that he is capable of running close to 4:10-13. Overall, there will be more guys listed or not listed who are destined to run under the state qualifying mark of 4:22.