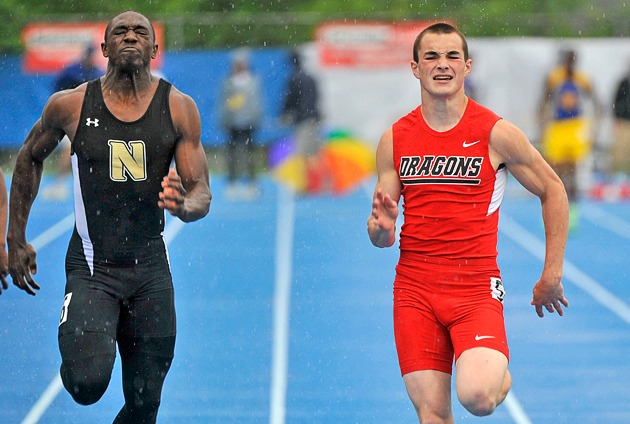 2014 should be a year in which the sprints and hurdles collectively experience a big jump in performances as many of the emerging stars return. Pekin's four event star Cole Henderson returns for a senior year that is expected to wow the fans of track and field in this state. It has been a very long time since boys sprints and hurdles have gained the sport's attention in this state. It will happen this season for sure.  The tracks all across the state should see some fine performances that the girls have had for the past five years. 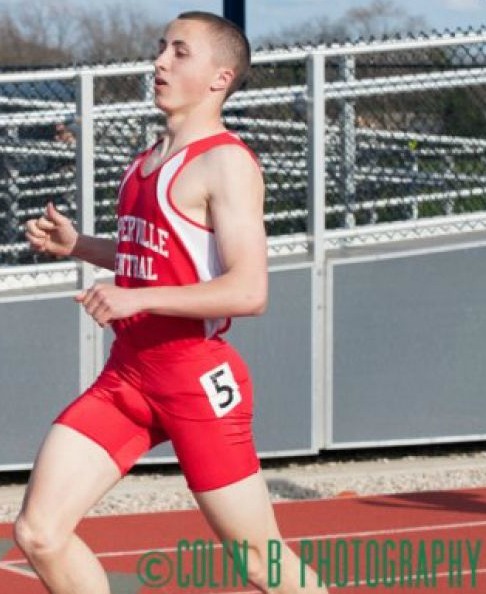 Sam Bransby will be a force this spring in the 400m

400m-
2013 State Champion: Matt Burns (Sr., Villa Park Willowbrook) 48.89
Key returners: Burns, Cole Henderson (Sr., Pekin), Sam Bransby (Sr., Naperville Central), Kenny Lewis (Sr., Plainfield East), Paul Ifianayi (Jr., Elk Grove), Alex Shulga (Sr., Grayslake North), Chris Wilson (Sr., Minooka), Matt Anyiwo (Sr., Homewood-Flossmoor), Jack Meadows (New Lenox Lincoln-Way Central), Imani Payton (Sr., Chicago North Lawndale Charter).
Outlook: For the first time since 1999, no one broke the 48-second barrier.  That’s the bad news. The good news is the top three state placers return plus the multi-talented Cole Henderson.  In other words, 2013 was an abberation and this year fans should witness a few long sprinters running in the mid 47-second range.  Kenny Lewis ran 48.56 last year but was relegated to 49.44 in last year's state final. The awful weather had something to do with it, but at the same time it could have been nerves that unraveled Lewis who was in the limelight for the first time in his career.  Henderson was another first time emerging athlete turned star that had a rough time in the 400 final. He finished last in 51.10.  He did not offer any excuses for his performance.  He was able to regroup and win the 200. But somewhere there has to be an inner voice screaming: "we are going to get revenge next year!"


110HH-
2013 State Champion: Andrew Helmin (New Lenox Providence Catholic) 13.99 [0.8]
Key returners: Antonio Shenault (Jr., Roselle Lake Park), Austin Corydon (Sr., Frankfort Lincoln-Way East), Tifonte Hunt (Sr., Harvey Thornton), Daylen Hubbard (Jr., Chicago Heights Bloom), William Session (So., Belleville East), Nikita Smith (Calumet City T.F. North), Matt Konopka (Sr., Palatine Fremd), Os Moore (Jr., Belleville East), Luke Pilliod (Sr., Glenview Glenbrook South).
Outlook: The writing was on the wall when Lake Park head coach Jay Ivory smiled brightly when someone asked him who Antonio Shenault was. The then sophomore had produced one of the top sectional performances and no one really knew who he was.  He continued his rampage during the proceeding state championship weekend that ultimately earned him a third place medal and big personal best of 14.28.  Shenault will have a big target on his back as he returns as one of the nation's best short hurdlers. Austin Corydon ran 14.67 last season and finished sixth last year in the state.  Daylen Hubbard and William Session may be this season's top two emerging talents bubbling all the way to the surface. Hubbard picked up a huge personal best over the summer in JO Nationals (14.31). Session, the son of former E. St. Louis Senior superstar Rodney Session, also enjoyed a tremendous summer running a lifetime best of 14.49 during his freshman campaign.  Finally... here is a bonus name for you all that was not listed in the key returner category.  His name is Eric Walker and he is a junior at Chicago (St. Rita) on the south side of the "Windy City."  Walker is self professed track and field fiend who has big plans this spring.  He ran 7.81 for 55HH back in December at the University of Chicago Holiday Classic. The time would have been good for 10th in the state for 2013.  So in other words, don't be shocked when Walker busts out this year.

300H-
2013 State Champion: Dave Kendziera (Mt. Prospect [Prospect]) 37.28
Key returners: Conor Dunham (Sr., Chicago St. Ignatius), Antonio Shenault (Jr., Roselle Lake Park), Michael Jopes (Sr., Naperville Central), Matt Henry (Sr., Skokie Niles North), Josh Yamamoto (Sr., Palatine Fremd), Imani Payton (Sr., Chicago North Lawndale Charter).
Outlook: The 2013 graduating cast that included Dave Kendziera, Andrew Helmin (Providence Catholic), and Lino Mogorovic (Lyons Twp.) will be very hard to replace, but someone will have to do it.  Conor Dunham will be the first name to sign up for supremacy in this event after placing third in the state last spring.  His personal best time of 38.36 puts him in line to run somewhere in the low to mid-37s this season.  Imani Payton (left photo) got his wish when his team was elevated to compete in 3A after dropping down last season.  He will now be able to compete head to head with the best athletes in the state.  Payton, who is a solid all-around athlete, stated that he intends on running in the "36s this year."  That very boastful comment will be put to the test this season for sure.