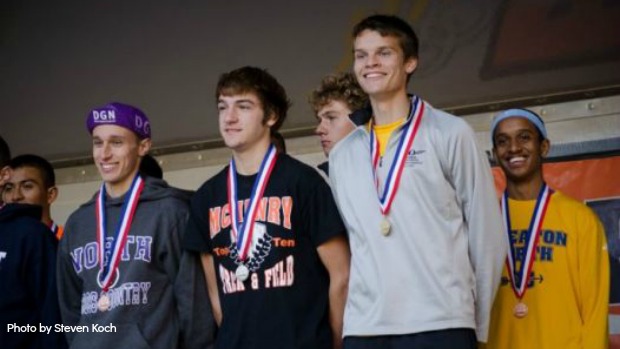 “Talk is cheap, dirt is free, don’t tell, show me,” mused Kroy TC (York) coach Charlie Kern alluding to the Dukes chances of getting the train back on the track after two suffering two derailments in a row.  For those out there who are unaware of York’s recent plight, the team has suffered two losses in a row (2nd at state sectionals and 5th at the state meet) entering the regional meet. There had been talk of the Dukes being overconfident, lost, sick, uninspired, and overrated.

However, there is one thing that is certain to not change: they will be ready to compete on Sunday.  If you recall back in 2011, the Dukesters finished fourth in the state meet and wound up winning the NXN Regional.  In fact, York is also the only team that has qualified for all nine Nike Cross National Championship races.  The key for the Dukes will be their steady foursome of Nathan Mroz, Matt Plowman, Kyle Mattes, and Alex Bashqawi racing together and maintaining contact throughout the race.  They were known as the “four horsemen” during the regular season as they crushed their opponents.  As well, the scoring split will need to improve mightily from the horrendous 1:05 from state.  If this and the health of Bashqawi can rebound the Yorksters will be fine.

Will fellow West Suburban Conference (Silver division) foes Lyons Twp, Downers Grove North, and newly crowned 3A state champion Hinsdale Central be ready for the next level of competition? Or are they still celebrating from the sweet success of a great IL state meet?  In Hinsdale Central’s case, this will be an opportunity for an emerging program to jump up into the national spotlight and compete with the likes of Columbus North, Carmel, and of course York.  The Red Devils will have the front running Billy Magnesen to go along with a talented supporting cast led by Kevin Huang.  At the state meet, Central produced an indestructible 32 second scoring split that made it impossible to be defeated.  Hopefully, they were able to maintain their fitness leading up to this weekend so they can pack their bags for Portland and the national championship.

O’Fallon should be a team ready to challenge for supremacy after rebounding to form during the last several weeks of the season to get third at state.  The pre-season #1 Panthers will be led by individual favorite Patrick Perrier.  He will assuredly have his plane tickets stamped for Portland.  But he has made it clear that he wants to make the trip to make the trip out west with his teammates.  Dorrian Gordon will be the chief runner for the Panthers in getting the pack rolling.

Carmel is the Indiana state champion and reining regional champion.  The Greyhounds are a very strong pack running team led by Ben Veatch and Bobby Browning who placed fifth and seventh respectively at the state meet. The team displayed the usual 30 second scoring split and a mind boggling 33 seconds through seven men.  If the Greyhounds can replicate another performance like this with their members up front with the key teams, they will be heading back to Portland.

If tradition means anything Columbus North should be in a good position to fight for a top five team spot. The Bulldogs placed a close second to Carmel at their state championship 78-64.  They actually led halfway through the affair before the top ranked Greyhounds took charge in the final mile. North will be led by the all-state combo of Andy Carr and Seth Williams.  They placed in the top 20 and will be the key up front for the Bulldogs.  The strong supporting cast will feature Kaden Eaton and Chase Ballard.

St. Louis University will be well acquainted with the competition outside of the St. Louis metro area as they have faced some of the key competition here.  Last year, the Billikens competed at the famed Palatine Invitational in 2012 against the likes of York and host Palatine. They also placed in the top 10 at Terre Haute. This veteran crew defended their 4A state title successfully over #1 Rock Bridge 103-119.  The scoring split ran an impressive 32 seconds for a tight squeeze victory. Shayn Jackson is the team’s top runner but he will be without solid teammates Jack Sullivan and Thomas Hogan. The Jr. Billikens will add sophomore add former O’Fallon standout Dustan Davidson to their squad for reinforcement.

Ohio will have solid representation from Cincy St. Xavier.  The two-time defending Division 1 champions ran through their state competition this year like water as the 46-105 drubbing of Dublin Jerome proves.  Guess who the Bombers only loss came to?  That’s right the Carmel, Indiana Greyhounds by a single point 88-89 at Trinity Valkyrie Invitational in Louisville, KY back in September. That race was a long time ago for a team with a short memory.  It is certain that the three-headed monster of Michael Hall, Evan Stifel, and Michael Vitucci haven’t forgotten about the setback.

Individually, the scene should play out more smoothly than the team picture solely because US#5 (according to Milesplit USA) Patrick Perrier is the odds on favorite to win.  He has won every competition in a delicately picked racing season.  Perrier indicated earlier in the season, “I am going into hibernation for most of the regular season so I can be ready for the post-season.”  He mentioned Portland as a top destination for December. However, there is one runner lurking and waiting for revenge. That harrier happens to be Noah Kauppila of Marquette, MO. Kauppila gave Perrier his toughest battle thus far this season.  Both standout runners were locked together at the Parkway, MO Invite for two miles before Perrier pulled away in the final mile to win by 10 seconds in a record setting 15:03.

Although Lisa Luczak of IL state champion Glen Ellyn Glenbard West has entered to compete in the regional meet, the remaining members of her team including Madeline Perez has decided to shut it down for the season.

IN champion US# 4 Carmel would have been the favorite regardless.  The Lady Greyhounds may have the slight advantage over IL 3A runner up Naperville North on depth but that’s like picking apples and oranges.  It will come down to the scoring split and number five runners for both schools.  But the battle for victory will be set up by the front running prowess of these two talented and deep squads. The Greyhounds will strike with state champion Kelcy Welch.  She ran one of the fastest times on the rugged course in 17:53. The Huskies will counter with Elly DeTurris and Maria McDaniel.  They both placed among the top of the Illinois food chain during the regular and post-season.  More importantly, they would like to return back to Portland Meadows with Carmel.

New Trier is another team that is destined to return back to nationals despite losing the Ackerman twins Jessica and Courtney.  The Trevians will have newly crowned 3A state champion Mimi Smith as its low point scorer.  She will undoubtedly be among the elite runners in the race and it is a hope that her teammates can maintain a 30 second or lower scoring split in order to return to Portland.

Mason, OH is the Ohio D1 Champion and back on the rise.  This school was a big player in the regional sweepstakes a few years ago.  They will be looking to return back to Portland.  The Comets best runners are Leah Ford and Ellie Brush.

The individual race should be interesting as the matured sophomore Taylor Werner (St. Genevieve MO) is undefeated and ready to return to Portland and settle some unfinished business. By the way Taylor is US#4 in the Milesplit weekly individual rankings.  Is there anyone out there that can touch her? If there is maybe it’s the bubbling freshman Anna Sophia Keller of nearby Effingham (St. Anthony) IL.  Keller is a prodigy in her own right despite competing in the smallest classification (Class A).  She set Detweiller Park ablaze last weekend running a class record 16:36 and winning by a country mile.  She may not beat Werner but it should be interesting for the fans.  Also, throw Kaitlyn Ko (Buffalo Grove IL), Mimi Smith, Mckenzie Caldwell (Columbus North IN),  and Annie Heffernan (Cincy St. Ursula OH) into the mix.

Our FREE Pre-Race Pasta Party will be held at the Terre Haute Children’s Museum (http://thchildrensmuseum.com) on Saturday night from 6:30p-9:00p.  Friends and Family may buy tickets at the door for $10.00.  All registered teams will receive 1 ticket/athlete and 1 ticket/”coach”.  Team and individuals will pick up their tickets at the door.  There will be no admittance without a ticket.  We are proud to host Olympian, American Record-Holder, and fellow Midwesterner Evan Jager who will be on hand for pictures, autographs, and advice.  Eastbay will sell merchandise on the 3rd Floor.  8th & Wabash, Downtown Terre Haute!

In the event of inclement weather- all athletes and fans will head to their buses and cars.

Box Assignments: Will be available at Packet Pickup and at  http://www.runnerspace.com/nxnmw

All race entries are FINAL, there will be no changes.

If an athlete runs in an unassigned race, they will be disqualified and will not receive a time.

Gates open at 9:00a on Sunday morning.

All participants will use the Athlete Entrance on Tabortown Road.  This gate will be marked.

Race-day admission for all fans is $5.00/person.

All Team Camps must be located in Tent City located directly behind the Start Line.  Teams may not set up camp along the East side of the straightaway.

Teams in the Championship Race will declare their 7 runners at Packet-Pickup.  All other runners will be placed in the Open Race.

Teams in the Open Race do NOT have to declare 7 runners.

NO PETS are allowed inside the gates of the Wabash Valley Family Sports Center!

The Indiana Track and Cross Country Hall of Fame is located at the Terre Haute Convention and Visitors Bureau, 5353 East Margaret Drive, Terre Haute, IN.  They are hosting a FREE Open House with refreshments during the hours of 10:00a- 4:00p on Saturday.

There are four HAY BALE stations spread throughout the course:

Thank you so very much for supporting another Cross Country Town USA event!