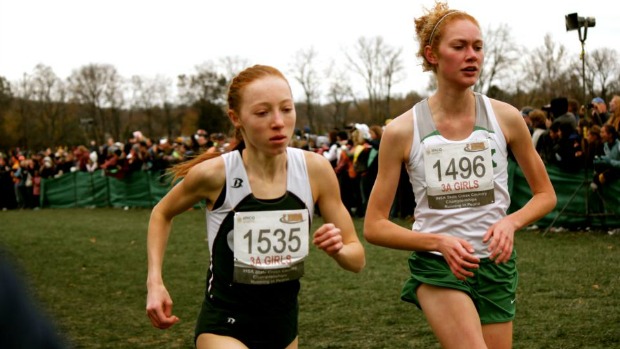 2012 was the deepest year on record for the girls at the state championship that saw an amazing 87 girls break 18:00 for three-miles. As well there two home land teams that qualified for the Nike Cross Nationals in Winnetka New Trier (11th) and Naperville North (15th)- a fantastic year on the girls' side for both for individuals and for teams to say the least. This season should see more of the same so let’s take a sneak peek. Keep in mind that views are subject to change by the time the official season commences on August 14.

Quick outlook: If this wasn’t a quick team overview, the real saga of Naperville North would be told.  But it’s easy to say that this team will be loaded!  The Huskies should be one of the best teams in the entire country at the end of the season again.  The only key loss is Kimber Meyer. This juggernaut is so deep that coach Iverson does not even know who will be his top 7 from week to week.  Count on the steady DeTurris and McDaniel to lead the way.  Whoever else that is plugged in will be a bonus.

Quick outlook: There is no team better than Glenbard West 1-3 in the state.  In fact, this trio has the chance to be the best in IHSA history if all goes according to plan.  But cross country is a seven girl affair in which only five can score.  So even if the magnificent Perez and her two mates sweep the state meet, there is no guarantee of a gold plaque.  Let’s see what the rest of the lot do this fall before final verdict is in.

Quick outlook: The Lady Pirates will be knocking on the trophy door again this fall with a veteran team returning.  Coach Parks may have his best team this fall despite losing the long standing Tess Wasowicz to graduation.  Look for the seasoned Cox, Lincoln, and McPherson to lead the way. Expect the girls to fight with the likes of MSL league foes Barrington, Prospect, and Hoffman Estates prior to the state series.

Quick outlook: It was just a few short years ago when Geneva on top of the cross country world.  It appears after a strong return last fall that netted a 6th place finish at state proved that great coaches mold great programs if they can obtained quality athletes. Coach Thomson will have a talented bunch this season that is aimed to cause a lot of panic. Adelman and Altmayer endured a healthy track season and should move up in the ranks this fall.

Quick outlook: Coach Revolta should never be discounted when it comes to cross country because she seems to always find seven girls who produce supreme results at the end of the season.  The expectations will be the same this season as it always is… get in and mix it up with the top forces in the game.  Palatine may be the best team in the MSL but the Fillies will not be far behind.  Conroy was the top runner behind the often MIA Rebecca Batliner but she was graduated.  Reynolds should also be one of the team’s top runners this fall.

1. Madeline “Maddie” Perez (Sr., Glen Ellyn Glenbard West)- The best to ever do it on a cross country course is back.  The all-time leader with an“iron will” produced the mind blowing 16:02 at Detweiller will have to answer questions about breaking 16:00 this fall.  But we all know that her main focus will be on her team’s quest for a state title.

4. Mimi Smith (Jr., Winnetka New Trier)- we will see how she handles competing without the wonder twins Jessica and Courtney Ackerman.

6. Lauren VanVlierbergen (Jr., Algonquin Jacobs)- oh if she only concentrated on one or two events during the spring!  Fortunately, cross country has just one race.

9. Kelsey Schrader (Sr., Dekalb)- don’t be fooled by the average track season.  Schrader is a monster on the grass.  She will rebound as a tremendous force in the autumn.