The talk of the 2013 spring has been the un-spring like conditions. But somehow we all have been asking these same questions generation after generation: ‘when is it going to warm up’ or ‘do you think it will stop raining so we can get in a good meet?’

Well guess what?  The Ritter Invite is supposed to be more of the same that Chicagoland has endured this spring: bouts of rain, cloudy gray skies, high winds, and cold temperatures.  Hopefully, solid times will accompany the aforementioned meteorological report.

The distance events are the meet’s main attraction-

For those that don’t know this, the Ritter Invitational is named after living legend and retired Downers Grove North girls coach Bruce Ritter.  Mr. Ritter, who is also in the ITCCCA Hall of Fame, led the Trojans to the first official IHSA cross country championship in 1979.  So, it should not be a surprise to see this meet chocked full of distance powers on the starting line.

The 4x800 relay will lead things off with Palatine ready to rock the fastest mark in the state.  The Lady Pirates come in with a seed mark of 9:25.  They will have some good company with Mt. Prospect (Prospect), Chicago Lane Tech, Downers Grove North, Naperville Central, and Glen Ellyn (Glenbard West) with seeds under 9:50.  Regardless of the conditions, one of these teams will leave the Carsten’s stadium with the fastest time in the state- an early state championship preview race of sorts.

Maddy Perez (Jr., Glenbard West) will contest two races- the first of the evening will be the 3200m.  Ms. Perez has been running well in 2013, but for some reason she has had to share the spotlight after producing the greatest cross country season by an Illinois girl this past fall.  Watch for her to jump to the top of the leaderboard after tonight.  Perez ran 10:46 to finish second last year; she will need to run an honest effort with her teammate Lisa Luczak (So.) in the field.  Luczak won the Illinois Top Times 3200m in 10:37.04.

The 1600m will be the deepest event on the docket when it’s all said and done.  Perez should be the favorite despite coming back from the “deuce.”  Perez is the state leader at 4:59.95 but she will have some serious competition with Tess Wasowicz (Sr., Palatine) and Emma Fisher (Sr., Elmhurst York).  Fisher was the indoor leader in the 3200m, but she also produced a solid 5:05i time.  Wasowicz has improved from an 800m specialist to becoming one of the state’s best milers.  She will be looking for her first sub-5:00 Friday evening.  Also, keep a bird’s eye watch out for Liz Cox (Jr., Palatine), Brooke Wolfe (Sr., Prospect), and Christina Santiago (Jr., Prospect).

Let’s not forget about the 800m.  This event is stocked full of talent, but the seed times of some of the key girls may not live up to billing assuming many of the top girls will be running fast legs in the 4x800r or saving some juice for the 1600m.  At any rate, Palatine’s Cassidy McPherson (Jr.) and Kara Burton (So.) will mix up with the best of them.  However, if Emma Reifel (Sr., Glenbard West) and Lauren Poplawski (Sr., Prospect) enter this affair with fresh legs, it will be a duel between the two standouts.  Reifel, the Illinois Top Times champion, motored 2:14.85i this season and Poplawski has a 2:13 personal best on her resume from last season. 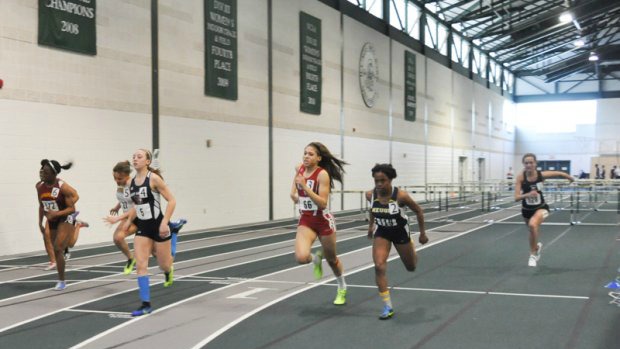 Saffa and Spanola ready to rock the sprints, hurdles, and jumps charge-

Anita Saffa (Sr.) is one of half of the dynamic West Aurora duo that will take dead aim at racking up serious team points Friday night.  Saffa will be the favorite in the 100m and 200m dash races.  As well, she will more than likely be a strong contributor on two relays to aid big point production.

Emma Spagnola (Jr.) is the other half of the aforementioned duo threat that will make a big splash in the 100H, 300H, long jump, and high jump.  Spagnola has the top seeds in all four of her events.  She and Saffa could potentially contribute to 80% of the team’s point production. 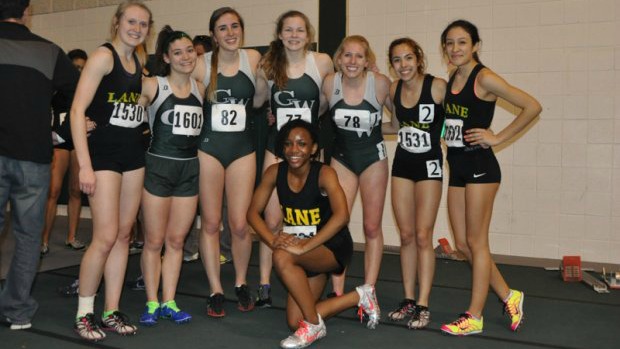 Last but not least-

The 400m will be strong with Sarah Kreikmeier (Sr., Lyons Twp.) and Bertha Frazier (Jr., Champaign Central) leading the charge.  Kreikmeier has been a key contributor of the team’s 4x400r over the past year or so, but now it’s her time to shine as an individual.  Frazier has stepped up out of nowhere with a fast early season time of 59.63 (currently #9 in IL).  It should be a good race to watch from a fan perspective.

The high jump could produce a wake up performance from defending 3A state champion Emma Haugen (So., Lyons Twp).  Haugen doesn’t have the top mark (Spagnola does at 5-5) but she is more than capable of getting back to that 5-6 or 5-7 range by the end of the night.

The showstopper 4x400r will be a welcome sight that will end the evening on a good note.  The “championship” heat is loaded with some of the fastest teams this thus far in the state.  Lane Tech will put together a solid quartet almost equal to the Top Times runner-up 4:01.99.  The Lady Indians will not be alone with Palatine, Lyons Twp, Downers Grove North, and Crete-Monee looking to put a wrap on a great meet.